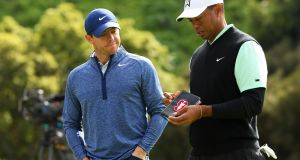 Rory McIlroy and Tiger Woods walk off the eighth green during the first round of the Genesis Open at Riviera Country Club in Pacific Palisades, California. Photo: Harry How/Getty Images

Rory McIlroy hasn’t bitten – not just yet anyway – in terms of renewing his PGA European Tour membership, which means any money or points won at this week’s WGC-Mexico Championship, a megabucks tournament with a limited sized field and no cut, or at the WGC-Dell Matchplay and the US Masters next month, won’t count on this season’s Race to Dubai order of merit.

The 29-year-old Northern Irishman – a three-time winner of the European Tour’s order of merit title in his career – has honorary life membership of his home circuit but still must fulfill the membership obligation of re-joining each year and paying membership fees, to have prize money or points count towards the order of merit.

Speaking to reporters at the Genesis Open in Los Angeles, McIlroy confirmed he hadn’t yet rejoined the European Tour for the 2019 season “for one reason or another” but that he would likely renew membership by the time he plays his first tournament in Europe in May, expected to be the British Masters.

McIlroy, like all players who are part of the European Tour, must play a minimum of four regular tournaments (outside of the WGCs and the Majors) to fulfill membership obligations.

By taking up his membership options in May, McIlroy – who has announced his intention to play in the Omega European Masters in August – can still feature in the Race to Dubai standings, even if those WGCs and the Masters played before he eventually takes up that membership won’t count for him.

So far this season, McIlroy has played in three events and achieved top-five finishes in all three. He followed up a tied-fourth finish in the Tournament of Champions with a tied-fifth place in the Farmers Insurance Open and, after a disappointing opening round, got into the mix in the Genesis Open where he finished tied-fourth.

McIlroy – one of two Irish players, along with Shane Lowry, in the limited field in Mexico – hasn’t won since the Arnold Palmer Invitational in Bay Hill last March. “I just keep preaching patience,” said McIlroy of the wait to return to the winner’s enclosure. “I am struggling to find the middle of the clubface with a lot of iron shots . . . . it’s another top-five and a step in the right direction.”

He added: “If this was the middle of the season and I just had a run like this, it’s still good golf . . . . the game’s right there. I’m happy with pretty much everything, just a couple of loose shots here and there with the irons, tidy that up. I’ve still got a bit of a right miss going on with the longer clubs, I’ll just try to get that out of the game and we’ll be right there.”

McIlroy – who moved up one spot, to eighth, in the latest world rankings – didn’t play in Mexico last year, when Phil Mickelson beat Justin Thomas in a play-off, but had a ninth place finish in 2017.

Lowry, who currently heads the European Tour order of merit, thanks to his win in the Abu Dhabi Championship, is making a first appearance in the WGC-Mexico Championship having failed to make the qualifying criteria in either of the last two years.

For Graeme McDowell, his flight ticket this week took him to the Caribbean rather than to Mexico. McDowell – without a full PGA tour card this season – has limited playing options along with sponsors’ invitations (he has lined one up for the upcoming Honda Classic) to compete on the US circuit this and will be looking to make the most of his opportunities. He is the lone Irish player in the field for the Puerto Rico Open this week.

Paul Dunne’s third-place finish in the Super 6 tournament in Perth has moved him up to 41st in the latest Race to Dubai standings on the European Tour, and – having completed a five-week long stint on the road that started in Abu Dhabi – he has a week-off before resuming play at the Oman Open in Muscat.

The Ladies European Tour kickstarts its season this week with the Australian Classic in Bonville and Leona Maguire, who secured full playing rights at Q-school last year, is competing as she aims to hit the ground running before juggling her schedule with the Symetra Tour in the USA.