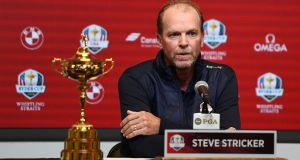 Steve Stricker speaks with the media as he is named United States Ryder Cup Captain for 2020. Photo: Stacy Revere/Getty Images

Tiger Woods has delivered a ringing endorsement of Steve Stricker’s appointment as the USA’s Ryder Cup captain. In the least surprising development of this golfing year, Stricker was confirmed in position by the PGA of America on Wednesday. He will seek to reclaim the cup from Europe at Whistling Straits in September 2020.

In Mexico City, where he was making final preparations for the WGC-Mexico Championship, Woods spoke effusively of his long-time friend. Woods was also part of the selection panel which chose the 51-year-old from Wisconsin.

“He was the overwhelming choice by all of us on the committee,” said Woods. “All of us felt that it was his time, that he was deserving. What he has done as the leader both in the Presidents Cups and Ryder Cups has been tremendous and we just thought that with his leadership and the way the guys follow Stricks, that he would be the best captain there is for 2020. The players were unanimous, they wanted him on as their team leader and we felt the same way on the committee.

“Everyone knows he’s such a nice guy but beneath all of that exterior is this fieriness and this competitiveness and he’s also one of the more detail-oriented guys that we know of. I think that he’ll be prepared, he’ll be understanding and he’s very good at communicating with the players and getting their opinions but also putting his foot down when he has to. That’s an important job.”

Stricker, who is the 29th man to lead the US, is also the first without a major win. Pádraig Harrington was named as the European captain last month. In the here and now, Woods has focus on what would be a remarkable 19th World Golf Championship win. This marks his first competitive appearance in Mexico City.

“I take a lot of pride in playing well in the biggest events,” added the 14-times major champion. “So that being obviously the majors, the Players and the World Golf Championships. I think my record has been pretty good in those events. So just because this event has been in different places, it still gets the best players in the world and I’ve always enjoyed competing against them and trying to beat them and win an event. I’ve had some success in World Golf Championships no matter where they’re played.”

Key here is properly assessing the impact of altitude. “I hit a couple shots yesterday with a wedge on the course that flew 180 yards,” said Woods. “On Sunday [in Los Angeles] I hit a five-iron 171.”

Woods wore a broad smile when admitting thoughts of the Masters started “back in October” but the serious element relates to this player, fully fit again, harbouring legitimate hopes of donning the Green Jacket once more.

“Last year was different and in previous years it [hope]was nonexistent,” Woods said. “This year to be able to ramp up a schedule and to be able to know what I can and can’t do going into the event is a lot more comforting than this has been in the previous years because it’s been kind of an unknown.”

Woods’s schedule remains unclear after this week. A run of tournaments in Florida – the Honda Classic, Arnold Palmer Invitational, Players Championship and Valspar Championship - precede another World Golf Championship, this time the Match Play in Austin. The likelihood is Woods will skip the Honda and possibly Match Play.

“From here on out, it’s very complicated,” Woods explained. “Next week’s at home for me, then there’s a tournament that I’ve won there eight times. Then another event that I’ve won a couple times. Then the week after that is where I had an unbelievable week last year. So it gets very complicated. That’s what I’m trying to figure out, how much to play, how much is too much, how much is not enough, and at the end of the day being race ready enough for April and making sure I get enough competitive rounds.

“This year’s even more complicated than last year. I feel better but I’ve got four events right there in my state that I live in and it gets very complicated.” – Guardian service