Controversial ruling compounded by American going for green after drop 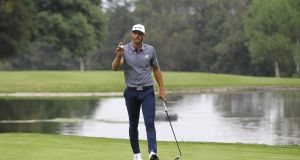 Dustin Johnson acknowledges the crowd during the final round of the World Golf Championship Mexico at the Chapultepec Golf Club in Mexico City. Photograph: Mario Guzman/EPA

Perhaps the whiff of cordite is destined to fill the air for this entire golf season. Glory for Dustin Johnson at the WGC-Mexico, his second success in only three appearances here, was overshadowed in part by the sort of controversy that has suddenly become a common bedfellow for a sport once portrayed as gentile in nature. Contentious moments are the new normality.

Johnson will care little about background noise – he never does – as he celebrates what is a 20th US PGA Tour success. His eventual canter was such that a closing round of 66 for a total of 21-under par was sufficient to claim the trophy by five shots.

Yet for many others, including fans of Rory McIlroy, this Johnson success will sit uneasily. McIlroy started the day four shots adrift of Johnson, with the advantage halved within three holes. Johnson had stretched his cushion to three by the time the leaders took to the fifth hole. There, depending on your outlook, Johnson was either outrageously fortunate or guilty of rules manipulation.

Johnson’s pushed drive finished at the foot of a tree and with no forward shot possible, stymied. The American thereby appealed for and received a free drop owing to the fact his stance to play his second shot would have touched a cart path. This marked an incredible touch of fortune, as the man himself readily admitted.

“I got a break there and ended up making a nice par,” Johnson said. “That’s why I called the rules official over, just because you almost felt a little bad about it. But it was the only way I could play the shot. I even tried to get really close to it and I was still standing on the path, so I was entitled to relief and sometimes the rules work to your advantage.”

Two elements of this grated with many onlookers. Johnson’s demonstration of said stance actually looked unusually wide for what could only be a punch shot back on to the fairway. Secondly, he opted to play for and find the green from his relief area rather than perform the basic clearance job that would otherwise have been his only option.

Within the rules, Johnson did nothing wrong; whether he operated within the spirit of the game is another question entirely. Had he chipped out with shot number two, he would have earned widespread plaudits.

Any McIlroy annoyance was merely compounded at the sixth. There, in a freakish twist of fate, his drive ended up behind a tree that was also adjacent to a cart path.

Unlike Johnson, McIlroy appealed in vain for free relief; Mike Stewart, the rules official, insisted the shot he was intending to play with feet on Tarmac was not possible because his backswing would have collided with a tree root.

Clearly unhappy, he played out left-handed with the clubhead reversed and his disquiet intensified as he took a bogey six to Johnson’s four, an outcome that all but handed the tournament to the world number three. By the turn, Johnson was five ahead of McIlroy, and that was to remain the case.

McIlroy, to his credit, was not bitter. “I accepted my ruling and moved on, I didn’t ask for a second opinion,” he said. “I knew what happened with Dustin, I can’t control that.

“If the official thought it was reasonable for Dustin to take the drop but not me, then so be it. That’s why we have referees. I could see where he was coming from.”

In any case, added McIlroy: “When you have a four-shot lead and go out there to shoot five-under, you’re not going to get beaten.”

Paul Casey and Ian Poulter shared third place with Kiradech Aphibarnrat on minus 11. Casey signed off with a 65 before asserting that he has high hopes for this year’s Masters at Augusta. “I think that’s my best chance of a Major this year,” he said. A Sunday 62 from Justin Thomas left him in ninth.

Tiger Woods endured his latest woeful day with the putter in hand when en route to a 69. The 14-times Major champion has now produced back-to-back tournaments that have included six three-putts for the first time since 1997. His final round put him in joint-10th position.

Shane Lowry struggled in the final round to a disappointing closing 75, finishing on nine over. – Guardian