Out of Bounds: Golfers badly want to make it to Tokyo 2020 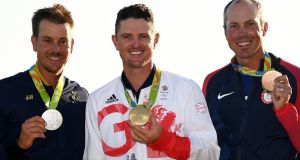 Justin Rose, Henrik Stenson and Matt Kuchar with their medals at the Olympic Games in Rio. Photograph: Ross Kinnaird/Getty Images

An interesting thing happened last month. Rory Sabbatini, who has been a South African golfer for his entire life, although living in the United States for the better part of his professional career, walked into the Consulate General of Slovakia in New York and signed the necessary papers to make him a citizen of the European country.

The sole reasoning for Sabbatini’s change of nationality - he is married to a Slovak - has all to do with the Olympics in Japan next year. There is every chance he will represent his new country, given that he is ranked 228th in the official world rankings and the next-best Slovakian Petr Valasek is a rather lowly 1,944th.

Better for Sabbatini to take on the likes of Valasek than heavy-hitters like Louis Oosthuizen or Branden Grace to become an Olympian!

Sabbatini’s switch from Springbok to Slovak is however interesting on a wider front, because it would indicate that golfers badly want to make it to Tokyo for the 2020 Olympic Games which is quite the contrast to how many (male) players were scared off by the mosquito-borne zika virus ahead of golf’s long-awaited return in Rio de Janeiro in 2016.

You’ll remember a long list of absentees on that occasion which numbered our own Shane Lowry and Rory McIlroy along with Australian high-fliers Jason Day and Adam Scott and Americans Dustin Johnson and Jordan Spieth from the men’s event. In contrast, the women’s line-up was hardly affected at all by any scare-mongering.

Anyway, as Justin Rose out-dueled Henrik Stenson to claim the gold medal and Inbee Park claimed the women’s gold, there was a lustre sprinkled on the golf tournament by those who actually made it to Rio and the grand prize is now seen as one worth winning and very important to a player’s career CV: there won’t be the same mass absenteeism of golfers from Tokyo, that’s for sure. Unless someone comes up with a scary story about the possibilities of earthquakes!

Whilst athletes, boxers, sailors et al gear up for qualifying tournaments over the coming year or so that will decide whether or not they make it to the Tokyo Games, the qualification system for golfers is a long time up-and-running.

Golf’s qualification actually started last June and will continue right up to July 2020, but the shape of things to come - for those who will get to tee it up at the famed old course at Kusumiageseki Country Club which has previously hosted a World Cup (back in 1957) and no fewer than four Japan Opens - is forming before our eyes and, again, it makes for interesting observation.

The qualifying tables will allow for 60 players in each of the men’s and women’s strokeplay tournaments and it looks set for Ireland to have two players in both events.

As far as the men’s qualifying is concerned, Rory McIlroy is currently seventh in the qualifying table while Shane Lowry is 19th; in the women’s qualifying, Stephanie Meadow is 49th and Leona Maguire is 52nd. There’s still quite a lot of water to flow under the bridge between now and the final qualifying events, but Tokyo 2020 will gain sharper focus in their minds as the Games move closer.

As for Sabbatini’s switch of nationality? Well, it signifies a change in attitude since golf’s return - after a 112 years absence - to the Olympics in Rio, on a course purpose-built because of golf’s minority status in Brazil. That Gil Hanse-designed course, by the way, is very much open for play as part of the so-called “legacy” to those Games.

The difference next time is that golf is a big deal in Japan (there are over 10 million golfers , more than 2,500 courses) and the manner of how Rose and Park won their gold medals in Rio provided a stamp of authenticity that made some of those who didn’t travel, for their own reasons, wish they had and, in the process, made an Olympic title one worth pursuing.

1 Sideline Cut: Vignette shows why Bird is the true shark in The Last Dance
2 Anfield and Cheltenham show sports again lacking in looking after their own
3 Brendan Rodgers says he was ‘really knocked’ by coronavirus
4 Andrew Porter diary: Meat, veg and intermittent fasting the order of the day
5 Niyi Adeolokun and Tom McCartney among Connacht departures
Real news has value SUBSCRIBE