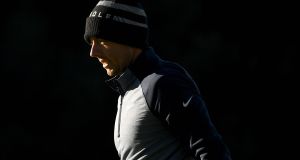 Rory McIlroy will not play in the 2019 Irish Open. Photograph: Harry How/Getty Images

Rory McIlroy will maintain his European Tour membership this season, despite confirming he will miss the Irish Open to focus on preparing for the Open Championship at Royal Portrush.

The Open is returning to McIlroy’s native Northern Ireland for the first time since 1951 and the 29-year-old is looking to win his first major title since 2014.

“If there is ever a year when I feel I can miss this Irish Open, it’s this year,” McIlroy, who will play the Scottish Open immediately before the Open, told BBC Sport Northern Ireland. “If I was to play the Irish Open, the Open Championship would be my third event in a row.

“For me, that’s not the best way to prepare for what could be the biggest event of my life.”

McIlroy had hosted the Irish Open since 2015 and won it at The K Club in 2016, but Paul McGinley will take over hosting duties at Lahinch this year.

McGinley was critical of McIlroy’s suggestion that he might only play two regular European Tour events this season, a decision which would mean losing his membership and the right to be Ryder Cup captain in the future.

However, McIlroy says he will play the minimum number of four events to maintain his membership and believes his critics “don’t see the bigger picture.”

“I wouldn’t miss that [the Ryder Cup] for the world. I’m still going to be a member of the team,” McIlroy added. “I’m just going to sort of play as little as I can [on the European Tour] to save myself for the golf that I’m playing everywhere else also.

“I love the Irish Open. I’ve supported it in my whole career. The people of Ireland are still going to see me playing golf because I’m going to play the Open Championship and I’m sure a lot of people will travel from down south to see me play.

“My main focus is the major championships, the WGCs . . . the biggest events in the world wherever they may be. They don’t know the ins and outs of your life. It’s easy to criticise from far away because you don’t know the details.

“I’m sure people are going to be upset but at the same time, if it means that it gives me a better chance to win The Open, and prepare well for Portrush, I’m going to do it.

“I’m going to make decisions that are the best thing for me. If that upsets anyone, then I’m sorry — that’s not my problem, that’s their problem.”

McIlroy needs to win the Masters in April to become only the sixth player to complete a career grand slam but added: “If I could pick one tournament to win this year, it would be Portrush. I would definitely have Augusta on the backburner.

“I never thought I would play a major in Northern Ireland. It would be the biggest achievement of my career if I was able to win it.”

1 Ireland suffer Twickenham torture yet again as England dominate
2 England 24 Ireland 12: How the Irish players rated at Twickenham
3 Eddie Jones’s comments have already provided Irish team-talk for 2021
4 England held all the aces in defining battle of the breakdown
5 TV View: Sunday Bloody Sunday . . . Not Bono’s fault but Boy, that was Bad
Real news has value SUBSCRIBE

Antonio Rüdiger says racism has won after boos at Spurs 22:30
Eddie Jones’s comments have already provided Irish team-talk for 2021 22:00
England held all the aces in defining battle of the breakdown 21:00
TV View: Sunday Bloody Sunday . . . Not Bono’s fault but Boy, that was Bad 19:59
Neil Lennon says Celtic still ‘a million miles’ from title after comeback win 19:31
Here is your handy guide to sport on television this week