Course specialist Slattery one off leader Green at Czech Masters 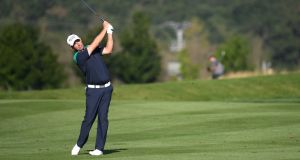 Ireland’s Pádraig Harrington plays his third shot on the 12th hole during the first round of the D+D Real Czech Masters at the Albatross Golf Resort in Prague. Photograph: Ross Kinnaird/Getty Images

Course specialist Lee Slattery carded an opening 65 to lie a shot off the lead after the first round of the D+D Real Czech Masters.

Slattery, who finished second at Albatross Golf Resort in 2017 and fourth last year, fired an eagle and six birdies to finish seven under par alongside South Africa’s Erik van Rooyen.

Malaysia’s Gavin Green held the lead on eight under after carding eight birdies in the first 12 holes and recovering from a bogey on the 13th with a birdie on the last.

Green also carded a 64 in the first round last year and went on to finish third behind Italy’s Andrea Pavan, who began the defence of his title with a 68.

Paul Dunne leads the Irish challenge after carding a two-under 70, one ahead of Gavin Moynihan. Reunited with his golf clubs after a scare earlier in the week, Pádraig Harrington signed for a one-over 73.

Slattery is seeking a third European Tour title but was surprised to shoot such a good score after an indifferent start.

“I played the first four holes today so badly, I played them like a 15-handicapper,” Slattery told Sky Sports. “It was a bit of a surprise to play that well on the back nine after not playing great on the front nine.

“It was quite wet out there, it was kind of like playing target golf. This place can get quite fast and fiery and it has been over the years but today it was a different golf course.

“It played quite long but you just throw darts at the pins, I quite enjoyed it.”

Austria’s Bernd Wiesberger, who missed seven months of last season after undergoing wrist surgery, is three shots off the lead as he chases a third victory in his last eight events.

“I try not to make whatever happens out here too dependent on how I feel off the golf course and in my life but I certainly appreciate what has happened the last couple of weeks,” Wiesberger said after his 67.

“I try to feed off it and not take it for granted either. Keep working and try to keep producing good scores and just enjoy myself out there.

“Even though I hit bad shots the frustration is maybe a little shorter than it used to be, so therefore it’s just a pleasure being out there and being in a position to play for these events again.”

Wiesberger qualified for the WGC-FedEx St Jude Invitational in the week after the British Open but decided to skip the $10 million event.

“I felt like I needed a couple of weeks off,” he added. “We had some great weeks, mentally tiring weeks, before the last break but we decided to come out and not make that break too long.”

SCOREBOARD
(British and Irish unless stated, par 72, (a) denotes amateur)