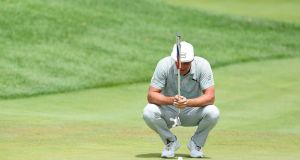 Bryson DeChambeau lines up a putt on the fifth green during the third round of The Northern Trust at Liberty National Golf Club. Photo: Jared C. Tilton/Getty Images

A hilarious scene played out on the penultimate day of this year’s Latin America Amateur Championship. While irked – and worried – by the delivery of a warning over slow play, Alvaro Ortiz took to hitting shots half a hole in front of his playing partners. The Mexican was battering drives away whilst his fellow players eyed up putts on the previous green, before officialdom delivered a hitherto unheard-of message: slow down.

There was no levity surrounding the Northern Trust event in New York last weekend. Bryson DeChambeau grabbed the spotlight in a manner far removed from typically upbeat portrayals of the world No 8.

The undertone was that plenty in golf, including fellow professionals, had grown tired of DeChambeau’s “mad scientist” persona. The issue causing the rumpus was even easier to detect, with DeChambeau’s glacial pace of play leading him into unchartered territory as fellow competitors opened fire, one by one. Footage of DeChambeau went viral; be it pacing out a 70-yard approach shot or spending more than two minutes assessing an 11ft putt. The contrast with Hinako Shibuno, winner of the Women’s British Open while standing on no ceremony whatsoever, was as startling as it was depressing. That’s before we even get to Ortiz’s extroverted approach.

DeChambeau came out swinging. He insisted his, ahem, deliberate episodes only take place on a tiny percentage of his shots. Rather than serve as a defence, that actually painted the 25-year-old in an even worse light. He is capable of playing at decent pace, within the 40 secs per shot guideline as issued by the PGA Tour, but occasionally decides he needn’t bother. And he would do so with perfect comfort; the Tour is woefully poor at issuing penalties for players who take timing liberties. Further DeChambeau piffle about the pace at which he walks to his ball being a mitigating factor is best treated with the contempt it deserves.

Rory McIlroy, who has routinely highlighted this epidemic, had bemoaned inaction from on high even before the DeChambeau circus ensued. “The guys that are slow are the guys that get too many chances before they are penalised,” said the world No 3. “It should be a warning and then a shot. It should be you’re put on the clock and that is your warning, and then if you get a bad time while on the clock, it’s a shot. That will stamp it out right away. I don’t understand why we can’t just implement that. We are not children that need to be told five or six times what to do.”

As it stands, entire groups are timed if they are deemed to be out of position relative to the group in front. From there, two infractions by a player will lead to a one-shot penalty. That competitors know how to milk the system is obvious week on week; they simply speed up when being timed. For shot penalties, see hen’s teeth.

Golf isn’t designed to be played with the tempo of ice hockey. To many, the serene environment is a welcome break from the modern world’s instant gratification. Yet this contrast always existed to an extent, when club players could easily complete 18 holes between breakfast and lunch. Now, in examples gleaned from watching the PGA Tour in particular, mid-handicappers think it perfectly reasonable to dawdle for hours on end. The decline in membership numbers at golf clubs has multiple explanatory factors but pace of play is fundamental as detrimental to this sport. It will be, too, at professional level when television executives discern this generation isn’t willing to sit in front of screens for hour after hour watching DeChambeau and chums line up putts from angles Pythagoras wasn’t aware of.

It was hardly heartening to read Slugger White, the PGA Tour’s most instantly recognisable referee, dismiss the necessity for punitive action. Discussing slow play, White painted a scenario whereby “you’ve drastically affected the guy’s life with the click of a stopwatch”. Applying White’s logic, football matches should run on until the team more desperate for points scores. In golf, whether a ball bounces in or out of bounds from a tree branch can dictate a tournament outcome. Slow players negatively impact upon their partners – opponents – and spectators through blatant disregard; and when well aware of the generous boundaries they should be operating within.

It is easy to feel an element of sympathy for DeChambeau. He is far from the only member of golf’s modern aristocracy who procrastinates. Nonetheless, if the focus on someone of this profile – rather than Guan Tianlang, penalised for slow play as a 14-year-old during the 2013 Masters – starts a conversation pointing towards tangible improvement, it is more than fair enough. And at base level, DeChambeau needs to sharpen up; bank robbers in Nottingham aren’t protected because someone simultaneously makes off with stolen loot in Swansea.

By Monday DeChambeau had conceded that “slow play affects the quality of the game for players and fans.” The PGA Tour, which in fairness can only act when its membership creates a stir such as this one, has promised to review its approach to pace of play. Next week at East Lake, 30 players will compete for a FedEx Cup bounty now increased to $15m. The best have never had it so good. Taking affirmative action against an element of the sport where the trickle-down is clearly detrimental feels like the least they can do. – Guardian