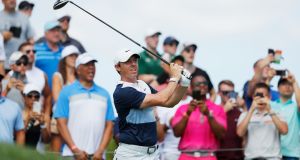 Rory McIlroy plays his shot from the eighth tee during the final round of The Northern Trust at Liberty National Golf Club last week. Photo: Kevin C. Cox/Getty Images

Rory McIlroy still has his eyes on the big (money) prize that is the FedEx Cup playoffs, which continue with this week’s BMW Championship at Medinah – where he first met his wife-to-be Erica during the 2012 Ryder Cup at the venue outside Chicago – and then reach a finale at next week’s Tour Championship in Atlanta.

The revamped system in play for this year’s conclusion to the PGA Tour season has ensured plenty of $$$ signs for those players who make it all the way to Atlanta where, technically, each and every one of the elite 30-man field will have the chance to lay claim to the $15 million top prize.

McIlroy, currently third in the FedEx Cup standings, is one of them. Shane Lowry, in 25th, is another. But Graeme McDowell – currently 64th – will need to do something special in Medinah if he is to leapfrog his way into the top-30 players who qualify for the Tour Championship.

Anyway, McIlroy – despite failing to ignite over the weekend in the Northern Trust – will use the days building up to the BMW to work on sorting out what he called a “two-way miss” which meant he couldn’t trust his swing in the Northern Trust where he nevertheless managed to secure his 13th top-10 finish of the season.

As he put it, “Even if I don’t feel like I’m playing well, I’m still able to get myself somewhat in contention and finish. That’s been one of the big things about this year for me, my consistency level has been there and even when one part of my game is off, I’m sort of making up for that with other parts of the game, whether it be driving or chipping or putting.”

As highlighted by Patrick Reed’s jump up the FedEx Cup rankings, from 50th to second on the back of a win in the playoffs, the weighted aspect of the playoffs – with four times the number of points compared to regular tournaments and also multiple of those available in the Majors – means that every player in the field has the chance to eye the biggest financial prize in the games.

After the BMW in Medinah, though, it will be all change going to the Tour Championship as those at the top of the rankings will effectively get head starts on those playing catch-up. What it means is that number one player in points will start the Tour Championship at 10-under, with the second placed starting at eight-under, and the third at seven-under. The system works its way down so that players 6-10 will start at four-under, those 11-15 at three-under, those 16-20 at two-under, 21-25 at one-under and 26-20 at level par.

“I think energy levels are going to be key over the next couple of weeks, especially with how hot it’s going to be in Atlanta. (It’s about trying) to find that balance between resting but still getting enough work in so that you feel like your game is where it needs to be,” said McIlroy.