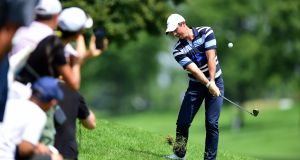 Rory McIlroy chips on the eighth hole during the first round of The Northern Trust at Liberty National Golf Club on August in Jersey City. Photograph: Jared C Tilton/Getty Images

Rory McIlroy carded a six-under-par 65 in the opening round of The Northern Trust as Tiger Woods struggled to a 75 in the first FedEx Cup playoff event.

McIlroy recovered from a bogey on the 10th, his first hole of the day, to record an eagle and five birdies at Liberty National and lie three shots off the clubhouse lead held by American Troy Merritt.

Merritt’s flawless 62 gave him a one-shot lead over former world number one Dustin Johnson, who also kept a bogey off his card in his 63, with Kevin Kisner and Spain’s Jon Rahm a stroke further back on seven under.

“I played well,” McIlroy told PGA Tour Live. “It was a little bit of a scrappy finish, I had to get up and down twice [for par on the eighth and ninth], but I played better.

“I hit some better iron shots today than I saw all week in Memphis, hit some nice little left-to-right shots that I didn’t have a couple of weeks ago and I drove it well, so if I continue to drive it well around here hopefully I’ll give myself plenty of chances to make birdies.”

McIlroy began the week second in the FedEx Cup standings and played the opening round alongside leader Brooks Koepka and third-placed Matt Kuchar.

The 30-year-old won the overall FedEx Cup title and $ 10million bonus in 2016 and would love to repeat the feat this season, especially with the first prize increased to a staggering $15million.

“I really like the playoffs,” McIlroy added. “Brooks and Kuch and I were playing together today and that could be the same thing next week depending where we end up in the standings after this week.

“I like that you have that intensity from the start. It was cool to play with those guys and I have another day with them tomorrow, sort of keep an eye on what they’re doing and try to play another good round of golf.”

Shane Lowry made his return to action after winning the British Open at Royal Portrush and the Offaly man carded a two-under 69.

Although he opened with a birdie on the first, Lowry dropped a shot on the third and added a double bogey on the fifth after driving into water to slip out to two over.

A birdie on the par-five eighth saw him turn in one-over 37 but back-to-back birdies on the 12th and 13th and another at the 16th saw him sign for a two-under 69.

Lowry started the week in 20th position after his Major breakthrough, with the top 70 players in the FedEx Cup after this week advancing to the BMW Championship and the top 30 after Medinah qualifying for the Tour Championship.

Graeme McDowell, 54th in the standings coming into the week, opened with a level-par 71.

Woods acknowledged that his back was stiff on the eve of the event.

“It’s still a little bit stiff, but that’s just the way it’s going to be,” he told reporters after finishing nearly last.

Woods could barely have made a worse start, four over par after nine holes, before somewhat steadying the ship on the back nine.

“I didn’t hit any good shots and didn’t make any putts. Other than that it added up to a round that broke 80,” Woods said.

“The driver felt fine but I just didn’t feel sharp with anything else. My iron game, which is usually the strongest part of my game, was off . . . my distance control was off.”

Since ending a decade-long major drought by winning the Masters four months ago, 43-year-old Woods has barely played outside the majors and has not impressed when he has competed. He entered this week’s event ranked 28th in the FedEx Cup rankings. Even if he misses the cut today, he is assured of advancing to next week’s BMW Championship, but not to the season-ending Tour Championship, where he won last year in a rousing performance that set the stage for his Masters triumph.

“I knew I had to post a low one and just didn’t do it,” Woods said. “We had an early tee time, perfect greens. “It just feels frustrating to shoot anything high no matter how I feel. I’m going to have to figure out a way to get this thing under par.”