Will competition leader rue leaving Patrick Reed out of team ahead of Northern Trust? 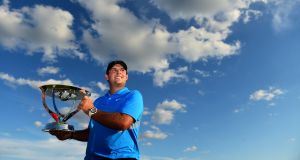 He took over the leadership of the competition in week 12 and has held on to top spot ever since, and now all Nigel Oglesby has to survive is one more week and two tournaments before we can crown him our 2019 Fantasy Golf champion. Mind you, after the trials and tribulations he endured in week 18, most notably in the transfer market, Nigel will be taking nothing for granted, not least because Hazel Sheridan succeeded in reducing his lead yet again.

That lead is still a considerable 605 points, leaving Hazel and all of Nigel’s other pursuers with a mountain of work to do at this week’s BMW Championship and Czech Masters if they are to have any hope of catching him and clinching themselves our €10,000 first prize. But thanks primarily to the efforts of her captain Rory McIlroy and Adam Scott, who tied for sixth and finished fifth, respectively, at The Northern Trust, Hazel was, at least, able to shave another 175 points off Nigel’s advantage and keep those hopes afloat.

Whatever you do, though, don’t mention Patrick Reed to either manager. Evidently uninspired by his 22nd place finish at the previous week’s Wyndham Championship, and him only having two top 10 placings in the 12 tournaments he played since the competition got under way, they both decided to dispense with his services going in to The Northern Trust. Where, of course, he had his first Tour victory since the 2018 Masters.

If that wasn’t painful enough, Nigel also opted to give Jordan Spieth the sack, thereby missing out on his reward for his share of sixth, but three of his new recruits - Jon Rahm (tied for third), McIlroy and Patrick Cantlay (tied for 12th) - provided no little consolation by bringing in a combined 645 points, the bulk of Nigel’s 730 points total. The less said about captain Koepka’s share of 30th, though, the better.

Ronnie McCarthy held on to third place but lost ground on the top two, captain Koepka a major, if rare, let-down for his Galloping Greens, McIlroy and Cantlay his only performers of note. John Mannion is in third, 250 points behind Ronnie, while Pamela Hood is a further 100 points back in fifth.

What all of the top five wouldn’t have given for a week like the one Patrick Brosnan enjoyed, his Another Mulligan line-up the only one in the competition to top the 2,000 points mark, captain Reed, runner-up Abraham Ancer, Spieth and McIlroy his chief contributors.

And what all of our contenders wouldn’t give for Another Mulligan-like week at the BMW Championship at Medinah Country Club and the Czech Masters at the Albatross Golf Resort, the final tournaments in the competition, and if anyone is to catch Nigel, a similar week may well be required.

Hazel and Ronnie had five players in common with Nigel going in to The Northern Trust, so whether they opt for a similar strategy - ‘marking’ the majority of his team and trusting that the rest of their line-ups do the business, while his head for home come Friday evening - well, we’ll see.

Best of luck to all our contenders . . . especially if it goes down to the wire on Sunday. By which point, we suspect, nerves will be a touch frayed.