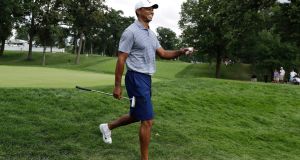 Tiger Woods smiles as he leaves the 14th green during the pro-am round of the BMW Championship at Medinah Country Club. Photo: Nam Y. Huh/AP Photo

Tiger Woods is determined to qualify for the tournament which provided his first win for five years after giving a positive update on his fitness ahead of the BMW Championship.

Woods was forced to withdraw from The Northern Trust ahead of his second round at Liberty National last week due to a “mild oblique strain”, inevitably prompting speculation that his Masters triumph represented the last hurrah of a remarkable career.

However, Woods was in upbeat mood on Wednesday as he targets a finish of 11th or better at Medinah — where he won the US PGA Championship in 1999 and 2006 — in order to qualify for the Tour Championship in Atlanta.

Woods, whose victory at East Lake last year was his first since the 2013 Bridgestone Invitational, said he was feeling “way, way better” and added: “It was nice to take those days off and I had to let it calm down and get a bunch of treatment on it and it feels so much better.

“I played the front nine today and played quite well, which was nice to see, nice to feel. I took the back nine off, chipped and putted quite a bit and it definitely doesn’t feel like it did on Friday, that’s for sure.

“As I’ve said before, the forces have got to go somewhere and unfortunately when I make any kinds of tweaks and changes to my swing it’s like a new body part’s aching. Unfortunately, I can’t play around the back like I used to and things flare up.

“I’m trying to make tweaks all year and ease the stress off my back while still playing. Unfortunately, I haven’t really done a very good job of that and when I have I’ve hit the ball quite well. I was really excited about what I was doing at Liberty. I’d made some nice changes and obviously it didn’t feel very well on Thursday.

“I’m trying to win this tournament just like anybody else in this field and trying to get to East Lake, trying to get to the place where a lot of things changed last year for me. Hopefully, I can make that happen.”

Woods will captain the United States’ Presidents Cup team at Royal Melbourne in December and although he wrongly thought he could still qualify to play with a victory this week, he has not ruled out giving himself one of four available wild cards.

“Whether that’s me and three other guys or just four other guys, either way I’m going to Australia,” Woods added.

Rory McIlroy fades as Tyrrell Hatton cruises to Abu Dhabi win 13:07
Keith Higgins becomes the latest Mayo stalwart to hang up his football boots 12:54
‘Don’t write me off yet’: Conor McGregor to fight on after Poirier knockout 11:35
Tony Finau shares the lead heading into last round in La Quinta 11:21
Sunday’s Thurles card called off due to snow 11:10
Here is your handy guide to sport on television this week