Out of Bounds: Leona Maguire heading in one direction

This week’s tournaments in Antrim will offer equal €250,000 pots for men and women 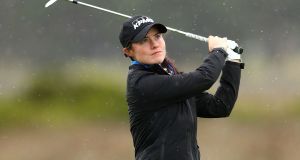 Leona Maguire is on the verge of securing her full LPGA Tour card for the 2020 season. Photograph: Kelly Defina/Getty

Leona Maguire’s face dominates the giant billboard outside Galgorm Castle golf resort outside Ballymena, with the words alongside her image proclaiming: “GAME CHANGERS.”

This week’s ISPS Handa World Invitational tournament is a game changer for sure, with the Co Antrim venue playing host to not one but two distinct events. One for men (on the Challenge Tour) and one for women, a standalone event. What’s different and potentially game changing is that the purses for both men and women is equal, with pots of close to €250,000 up for grabs.

Apart from the monetary side of things, the bigger picture is how this tournament ticks so many boxes. It is helped of course by the fact that one of its visionaries is the global music star Niall Horan, who - through his sports management agency Modest Golf! - has spread the golfing word with a passion.

“I love golf, and I want to see it grow. Everyone is saying ‘grow the game, grow the game’ and this is the time to do it. The way to do it is to get young females into playing golf, just trying it. I have a large female following and if I can get a small percentage of those to pick up golf clubs, that’s what I want to do it. It is a little check mark in my book if I can get some of my following to play golf. This is the start of it,” said Horan.

One of those young stars in the company’s stable of players is Maguire, who has returned across the Atlantic to play in the tournament. The Co Cavan player was one of those on the wrong side of the draw in last week’s Scottish Open but her play this season has been such - with wins on the Symetra Tour - that she is within touching distance of securing her full LPGA Tour card for the 2020 season. The formalities should be tied up in the coming weeks when Maguire returns to the USA, back to that tour which serves as the pathway to the big time.

For the next couple of days, Maguire will be playing alongside Europe’s Solheim Cup captain Catriona Matthew and tour winner Charley Hull who turned professional as a teenager and has wins on both the LET and the LPGA Tour. This will be, at the age of 23, her fourth Solheim Cup when it is played at Gleneagles next month.

Maguire, though, took a different route which took her through the US collegiate system with Duke where she became the most dominant player in the amateur game, with a record stint as world number one. “I played in the Junior Solheim in 2011 with Charley, but I wouldn’t change what I have done for the world,” said Maguire of her own pathway to the professional game.

As Mark McDonnell, the co-founder of Modest Golf! put it of Maguire’s plans this season in her first full year as a professional, “Leona had a strategy at the start of the year, she stuck to her main goal of getting the LPGA Tour card and she’s done great to remain focused on that, because there are so many distractions.”

So it is that Maguire has arrived to Galgorm with her face plastered on billboards, one of those with facial recognition to inspire others to the sport. Just like Horan’s vision.

And of this unique tournament, the first of its kind in Europe, the fact that men and women are sharing the fairways and playing their own tournaments for the same amount of prize money is in itself a game changer. As Horan, the singer with a passion for golf, put it, “We’re trying to create a legacy here.”

Southern Hills replaces Trump Bedminster for 2022 US PGA 06:14
Gerry Thornley: Without crowds, matches are just upgraded training sessions 06:00
Six Nations 2021: Jack Carty among the faces that just don’t seem to fit 01:00
Tadhg Furlong set to return for Leinster against Scarlets 01:00
Stuart Lancaster expects playoffs if Rainbow Cup is cancelled 01:00
Here is your handy guide to sport on television this week