Shane Lowry rested and ready to go after Open celebrations 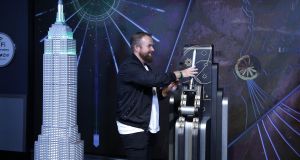 Shane Lowry at the Empire State Building with the Claret Jug and the FedEx Cup trophy ahead of the Northern Trust Open. Photo: John Lamparski/Getty Images

Shane Lowry revealed he had fully heeded Rory McIlroy’s advice to enjoy his Open triumph as he prepared to return to action in The Northern Trust.

“I sort of had to leave Ireland to calm down,” Lowry joked ahead of the first FedEx Cup play-off event at Liberty National. “I always said if I ever did get lucky enough to win one I was going to enjoy it — and that I did.”

That was exactly the approach four-time major winner McIlroy had advocated after admitting he had not celebrated some of his own victories in quite the same enthusiastic fashion.

“You still have to let it sink in and enjoy it,” McIlroy said. “I played nine holes with him (on Tuesday) and said to him make sure you do enjoy it, because in golf we’re always looking to the next week or the next thing.

“I think I haven’t celebrated some of my wins enough and looking back that’s something you really need to do, because you lose in golf a lot more often than you win and you have to celebrate those wins as much as you can.”

Lowry celebrated long and hard in Ireland the week after his dominant victory at Royal Portrush, before heading to Portugal on holiday.

“I’m feeling great,” the 32-year-old added. “I had a nice week after I won the Open, great celebrations and had a nice holiday last week and played some golf. I’m a little bit tired, but I’m looking forward to getting back into it tomorrow.

“I haven’t seen much of it (the Open) to be honest, but it’s something I’ll have forever. I feel very lucky to be able to achieve something like this. It’s just incredible.

“I sent everyone who is close to me and everyone who was with me that week a text which said no matter what happens the rest of our lives, we have this week. I still have to pinch myself.”

Lowry is currently ranked 20th in the FedEx Cup and needs to remain in the top 30 to qualify for the season-ending Tour Championship, which features a controversial new format to decide the winner of $15m for the overall FedEx Cup champion.

The player who has the most points after the BMW Championship will start the first round of the Tour Championship on a score of 10 under par.

The second-highest points earner will begin at eight under, the third ranked player at seven under and those who arrive at East Lake in fourth and fifth in the standings will start at six and five under respectively.

The next five players on the list will begin at four under, with scores regressing by one shot for every five players until those ranked between 26th and 30th start the event at level par.

“I would ultimately love to have a chance to win the FedEx Cup and I think to have that chance, with the new system, you need to be in the top 10, top 15 going into the Tour Championship, so I need a couple of decent weeks,” Lowry added.