Yes, gay people love GAA and like to play sport too

Joanne O’Riordan: My own brother’s story is a heartfelt plea for inclusivity in the game 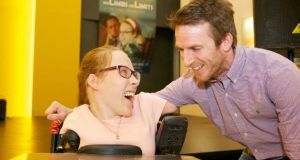 My brother Steven has always been my partner in crime. Many people think he is my only brother to exist. He directed my documentary No Limbs No Limits and has always instilled in me that I could do anything, be anything I ever wanted and it would be okay. Steven always made me feel included in absolutely everything, concerts, road trips, nights out.

My passion is GAA. I knew Steven was only half interested, but I never understood why his relationship with football was so up and down.

Pride week is coming up, and I see numerous journalists interviewing their heroes and those who have blazed a path for inclusion. Steven has always been my hero, my voice and my partner in crime. So, I wanted to amplify his voice. He’s told my story on numerous occasions, so I offered him my column to tell the world his. This is it.

The other day, I got a text from my friend Ger McTavish, the GAA’s Diversity and Inclusion Officer. Part of her work involves raising awareness about the importance of diversity and inclusion within the sport.

This week marks the virtual Gay Pride festival, and Ger wanted to mark the occasion with a virtual event that would help spark a conversation within the GAA about inclusion and diversity.

Growing up in a small rural community I have always been involved in sport, sport is a way of life, and without it, there is an immense sense of loss not feeling part of a group, club or community.

From the age of 10 to about 14, I dedicated all my time to playing GAA and always set the bar high. I was competitive and put so much pressure on myself. Being on the team was a number one goal for me, and I’ll never forget the day I got to put on the club jersey for the first time. It gave me a great sense of pride, belonging and an acknowledgement that I was doing well in training. My friends were happy for me too, and of course, my family were delighted!

I played with Dromtarriffe GAA as a midfielder. My role was straightforward; catch, kick, pass and cover as much ground as possible to help others score. I was the fastest on the team, but I wasn’t the tallest. However, I relished the idea of being the guy that set up the scores, and I always did my best to be a team player.

In 1998 we won our first club title, I was 14 at the time. We had the usual medal ceremony in the local GAA hall and all our friends and family came to cheer us on. There was great banter with the lads, and I was picked out by them to give the speech”. Soon our attention turned to doing the double, but for me, it was the start of the end when it came to playing GAA.

It is hard to explain, but during that time, I felt “different”. I thought that I did not belong. I started to understand that the conversations my friend were having were different from conversations I would like to have. I felt scared and sometimes alone on a team that wanted to win, make their families proud, and communities appreciate them.

My difference was not visible but an internal torment that saw me stepping back instead of pushing myself forward. It has taken 22 years to realise it, but back then, I had a bizarre notion that I didn’t fancy girls. Back then, I didn’t have the words to understand or verbally communicate it. I felt that if I did, I would be judged, bullied and made feel ashamed of who I was. Don’t get me wrong, I still shifted the face off every girl at the Cullen disco, but I knew deep down I was gay and I was worried that if I confided in someone, I would be outed.

I slowly began to retreat from the game I loved to avoid any conversation on why I might have given up sport altogether. My inability to express who I was back then resulted in me creating an empty void in my life after that. I still attended games, supported my local teammates, but I simply felt like I did not belong. I remember in school my friends used to ask why I gave up or lost interest. I shrugged it off as being bored.

At work, the owner of the local supermarket always encouraged me to go back, but I never felt compelled to do so as I was afraid to face my greatest fear, not being accepted.

I have often wondered what might have been If I kept at it, what would I have achieved? I often think about all the other potential club medals I missed out on. I think about the friends I made and lost when I gave up playing GAA at such a young age. I have often wondered would I have been accepted, if I had the courage to come out earlier, still be part of the team, but most of all belong.

The medal I won back in 1998 sits proudly on my mantelpiece in the house that I bought in Dublin. Before that, it took pride of place in my family home in Cork. I remind my new friends (gay and straight) that I once played GAA. The reactions are funny and sometimes amusing. My response is always the same “Yes, gay people love GAA and like to play sport too.”

I still attend matches, and I still get excited about the idea of being part of a team. I remember when I first moved to Dublin, I had planned to face the fear of my 14-year-old self and join my local GAA club. I sent the email, and I was ready to take the big move, then I heard commentary on the TV a reference to how a GAA player played in a match, and suddenly I realised that my 14-year-old self was not ready to put the ghosts of the past behind him.

The issue is not that gay people can’t play the sport, the problem is that we as a society make it hard for people to belong. We set up sport as a heteronormative activity, a masculine thing to do and any deviation from that is questioned or called out. For example, how many “pansies” do you know play GAA?

Speaking to Joanne about the issue of diversity and inclusion in sport, I told her how proud I am of winning that medal, but I still think back to a time where I felt I didn’t belong. She summed it up nicely. “Having pride comes easy, making progress that’s a whole different issue; it requires conversation.”

One of the hardest conversations I ever had with my parents was coming out. I felt physically sick having to do it, but there came a point in my life where I thought I had to do it. It didn’t help that when I first said I’m gay, my father didn’t hear me and said “What did you say?”

Coming out once was hard enough but having to do it a second time was hilarious. Perhaps it’s now time that the GAA and all other sporting organisations have the same type of conversation. Instead of talking about it, they embrace, showcase and promote real diversity and inclusion within the sport.

Now, the void I once had, has started to heal, partly because of Ger McTavish. I felt anxious about her text, but, as soon as I put on the jersey, I immediately felt that sense of pride and belonging come back to me.

This week marks the official Pride week, on Sunday, June 28th the Pride organisation is encouraging all sporting organisation to fly the Pride flag at their grounds to show and express solidarity with those who are LGBTI. It would give me a real sense of belonging to know my hometown of Millstreet/Dromtarriffe did just that.

Looking back, I wish I could tell 14-year-old me all of this. He’ll laugh knowing I still have my county medal, but I hope he’s proud that I am in my permanent home, surrounded by my supportive friends and family, roaring for my team, and myself, with pride.

1 Mary Hannigan: ‘Bitches Who Stood’ might be better viewed as useful allies
2 Leinster’s clash with Saracens will open Champions Cup quarter-final weekend
3 Game Changers: Living beyond fear puts Alex Honnold above all others
4 James Cronin anti-doping case may be reopened
5 ‘Everyone would play tomorrow if we could’ - Johann van Graan
Real news has value SUBSCRIBE