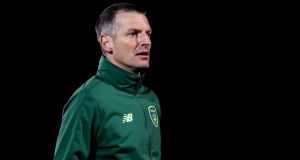 The Irish Under-21 team’s vital European Championship qualifier away to Italy will now take place on October 13th, Uefa has confirmed. Jim Crawford’s side will then complete their campaign the following month with group matches at home to Iceland and away to Luxembourg.

The campaign, which has been disrupted by the coronavirus pandemic, had started well for an Ireland team then managed by new senior boss Stephen Kenny.

Wins home and away over Armenia and Sweden have helped Ireland to make all of the early running in a group that will produce one guaranteed qualifier. An additional spot at the finals will go to the best of the runners up with the other eight going into play-offs.

Having drawn at home with top seeds Italy, Ireland lead their rivals by three points having played two games more. The teams have 16 and 13 points respectively with Iceland four points further back in third place.

Crawford’s first game in charge of the team will be a friendly against tournament co-hosts Slovenia in early September, after which he will have just over a month to prepare for the potentially decisive visit to Italy. It remains to be seen whether any of the squad’s key players will be lost to the senior international side now that Kenny is in charge.