Italia 90: Returning from a squat in London to a new Dublin 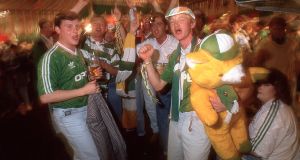 Ireland fans in the Jury’s Hotel watch the match between England and Ireland at the 1990 World Cup. Photo: James Meehan/Inpho

Maybe Italia 90 really did inspire the upsurge in Irish economic fortunes that followed it, or maybe that was just coincidence. But for me, the effect set-in the week we qualified for the tournament, the previous November, when I won a £25 book token from The Irish Times.

It was in the Monday readers’ competition, a regular feature of the newspaper then, which was the inspiration for a lot of bad poetry over the years. The challenge on this occasion – my debut entry – had been to write an anti-football anthem.

Despite being pro-football, I imagined myself as an employer fearing mass absenteeism on the morning after a big win, and rewrote the Auld Triangle: “An awful feelin’, came o’er me stealin’, as I looked at Whelan score another goal….” It was enough for the book token anyway.

I was working in London at the time, on a building site, and living in the squat from hell. There was no electricity on the ground floor, where my bedroom was: only the lads upstairs had power, borrowed from somewhere else.

So, it being winter, evenings had to be spent in the local greasy spoon café, or the pub, or in Willesden library, where my career as a freelance journalist in exile took delicate root. Whenever I thought of something that might get into print back in Dublin, I had to write it out long-hand – it hadn’t occurred to me yet to invest a typewriter – and then of course post it home. Amazingly, some of it did get used.

As for my other home, the squat, that was just a place to sleep. Only when it was time to go to bed would I head back to the house, entering via an old sash window that opened from the outside. The others never got around to giving me a key. Because I also left in darkness every morning, and because the building sites were working flat out in the pre-Christmas rush, I went 14 days once without seeing the room in daylight. But it looked better in the dark.

That was not a good time to be Irish in London, at least not at our end of the economy. IRA bombs were still going off occasionally, and being young, male, and from here made you automatically suspect.

The deadliest attack that autumn killed 11 army bandsmen in Kent. It sparked a mixture of a bravado and fear where I was working. “They were soldiers – they knew the risks,” was the verdict of our sub-contractor, a man from Clare. Then he warned everyone: “Straight home this evening, lads. This is definitely not a night to get picked up for being drunk and disorderly.”

Then we drew England, again, producing groans of a different kind. Holland again too, a double-repeat of Euro ‘88, with only Egypt to provide novelty for our first World Cup. Even so, having been in Germany two years before, nothing would stop me going to Italy, or so I thought.

One of the last things I did in London that winter – God forgive me – was break a red light while cycling. I remember the occasion vividly because it turned out that the car behind me had four members of the police in it, all of whom then interviewed me at length on the side of the street.

It was my own bike – from home. I had brought it to London on the ferry and night train to Euston (Ryanair hadn’t been invented then, so travellers had to supply their own lack of frills). But the police phoned in the serial number anyway, in case. They phoned in my name, in case too.

They also took an intense interest in the book (no doubt pretentious) I had in my lunchbag, which like the glasses I was wearing, didn’t quite fit the story of where I worked.

And although I answered all their questions very, very politely, it was made clear to me that my accent had added to the offence of the traffic light. One of the officers explained that he would be within his rights to bring me back to the station and charge me for something, and that because of where I was from, he was tempted. Then they let me go.

Between Australia and London, I had been away from Dublin for only about 15 months then. But what struck me about going back there in early 1990 was that, for the first in my experience, job ads had started to appear in the windows of shops, pubs, and cafes. “Mac jobs” mostly, but even so, it was a harbinger of something big.

Strictly speaking, I couldn’t take up any of these jobs. That’s because I had one already, from which I was trying to escape. In return for getting unpaid leave from the civil service, for a year at a time, up to a maximum of five, I had to promise not to accept another full-time job in Ireland that somebody else might fill.

Luckily, there hadn’t been any when I left in 1988. But by 1990, things were clearly changing. There was enough confidence in the air to persuade me that I too could stay here, freelance full-time, and survive. So I did.

On the downside, it had dawned on me by June 1990 that I would not be going to Italy. I watched the tournament Roddy Doyle-style instead, in a blur of Dublin pubs, and chippers, and cavalcades of distressed, pre-scrappage-scheme cars. Ronnie Whelan didn’t score any goals, as it happened. But under Jack Charlton’s game-plan, scoring was optional. The morning-after absenteeism happened anyway.

With every game, the rising excitement was tempered for me by the pain of knowing that the bragging rights earned for being in at the start of the mania, in Stuttgart two years before, were being overtaken by something greater, something that was going to define a generation.

Oh well. I had a career to launch. So did a lot of other people in Ireland, obviously. A week after the World Cup, The Irish Times competition invited readers to suggest something else with which we could now entertain ourselves. The winning entry – not mine – comprised one word: “Work”. It was funny because it was true.

1 Rory McIlroy puts integrity ahead of glory in US PGA second round
2 Bayern Munich complete formalities with rout over Chelsea
3 Lionel Messi waves his magic wand again to guide Barça past Napoli
4 Sene Naoupu turning mind back to rugby after health scare
5 Sporting Cathedrals: Semple Stadium, the very centre of the hurling universe
Real news has value SUBSCRIBE
Crossword Get access to over 6,000 interactive crosswords