Fintan O'Toole on Italia 90: Confessions of a teenage football weakling 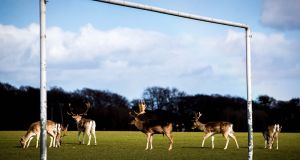 I was a teenage Rice Krispie. The moment I set foot on a football field , my nerves would snap, my bones would crackle and my eyes would pop. I was the sort of kid who couldn’t go near the beach in summer for fear that the seven-stone weaklings who had just had sand kicked in their face would pick on me for revenge.

Charles Atlas sent my postal orders back uncashed. I had ribs like a washboard, stiletto knees and biceps like burst balloons. When it came to football fantasies I dreamed of having the speed and grace of Rodney Marsh , but woke up in the clear light of day with the mobility and sharpness of Booterstown Marsh. I dreamed of having the feet of George Best, the balance of Pele the accuracy of Riva. All I got in reality were the teeth of Nobby Stiles.

To make matters worse , I came from a family with a great footballing tradition. My Uncle Séamus had once been kicked in the head by the superb England winger Tom Finney. My father had him up on his shoulders at an international in Dalymount Park when t he crowd surged and Séamus had tumbled down the massed ranks of Irish supporters just as Finney was getting into the stride of one of his famous darting runs . Some of the great man’s boot polish had rubbed off on my uncle’s forehead, and he even got a few words of fatherly advice, which were , unfortunately, carried away on the wind and the cheers. No member of my family has since been kicked in the head by a real soccer star, but we have always been aware of the burden of tradition weighing on our skulls.

What messed me up as a little midfield supremo was, of course, the church and the state . The church , in the form of the Christian Brothers banned soccer within an archbishop’s roar of our school. We were put into green sackcloth jerseys that had the same effect on the skin as sandpaper, put on a bus to the Fifteen Acres in the Phoenix Park and ordered to kick a rain-sodden leather football through the mud at one another for an hour or so, a form of diversion known as Gaelic football (the Fifteen Acres afterwards made way for the Papal Cross and environs, an act of corporal mercy which explains why Paul McGrath , Niall Quinn and Ronnie Whelan were so anxious to thank the Pope in person this week).

This had a terrible effect on my soccer-playing career. Whenever I was about to hoof the ball out of defence, a Christian Brotherly voice would roar at my conscience: “Sure that ’s only a game for gutties that ate their dinner out of a newspaper.” I would lose control of my two hands, condemned to watch in utter humiliation as they reached out and grabbed the ball , giving away a penalty. And likewise at the other end, nothing could stop me launching the ball over the bar for a non-existent point. As a trained sporting nationalist , I had a voice inside that kept asking how Green was my volley.

As for the state , well if they had provided better playing facilities, I wouldn’t have learned to play soccer on the street. The way to round an opponent was to bounce the ball off the kerb. A good pass was one that went over or around the neighbour ’s Ford Cortina without breaking a window. The way to nobble an opponent was with a subtle feint that sent him hurtling on to the road under the wheels of a passing lorry. You scored by aiming at the space between the lamp-post and Mrs Murphy’s gate . Then they put you on a real soccer pitch with this spongy green stuff under your feet , no cars to bend the ball around and white sticks where the lamp-post should be. No wonder I was brutal.

After years of humiliation , it dawned on me that I had got the object of soccer all wrong: it is not to win the game , but to avoid the recriminations of your team-mates. This is done by at all cost avoiding contact with the ball.There are four simple steps to soccer happiness which will guarantee that you get neither a sniff of leather nor a whiff of blame.

This is the only legitimate soccer technique whose object is to avoid touching the ball and must therefore be cultivated. Wait until the ball is coming towards you (never go towards it), shout the name of your nearest team-mate, then stop

and take one step to the side. Your team-mate looks stupid, you will be regarded as having a great football brain.

Ninety per cent of soccer is in the vocal chords. If the ball is unavoidably making its

way in your direction , shout one of the following: (a) “Leave it , Mick.”; (b) “On me noddle” or (c) “Centre it , centre it.” This makes it look like you want the ball, but in fact you will immediately be surrounded by members of the opposing team. Your team-mate will either pass the ball elsewhere or will send it towards you in which case your are honourably outnumbered and have a good excuse for not getting to it. If the ball is nowhere near you shout either “Mind your house” or “Leg it . Whacker .” At worst this puts your team-mates off their stroke and makes them look as bad as you are. At best , people will take you for a little midfield supremo.

Remember that your team-mates will be paranoid about the referee and inclined to believe you when you moan “Ah , refereeee.” The off-the-ball inciden t is to be recommended, since by definition no one will see it . If all fails , discourse to the ref on the ineluctable connections between self-abuse and poor vision. This way, you get sent off and have no more worries . You may even get a reputation as a hard man , in which case fellows with the ball will avoid you completely.

At all costs, keep your socks up , your shin pads on and your shirt tucked in , all of which are best done by keeping away from the ball. If anyone shouts at you, just tell them you are following a Fifa directive. That might shut them up.

Ryan Brennan secures the points for 10-man Shelbourne in Donegal 20:18
Defending champion Rafa Nadal pulls out of US Open due to coronavirus concerns 19:36
GAA offer €40 refund after all intercounty season tickets are cancelled 18:51
Wigan will play in League One after losing appeal against 12-point deduction 17:40
Man United close to €100m deal with Dortmund after Jadon Sancho agrees terms 15:11