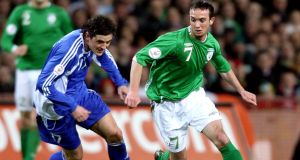 Stephen Ireland in action for the Republic against Slovakia in 2007. Photograph: Lorraine O’Sullivan/Inpho

More than two years after his last competitive game of professional football, former international Stephen Ireland says he is planning to return to the club game and that his ambition is to play again for his country.

“I really believe I have three or four years left in me, minimum,” the 33-year-old Corkman told The Athletic in an interview published on Wednesday. “Physically, I feel 27 or 28. I just want to get motoring again because there is so much more to come out of me.

“I feel if I went to League One or the Championship, I can really give it a good go. I will give it everything. I’ve broken bones before and I’m willing to break bones again. I’m not ready to stop. I’m going back because I have so much unfinished business.

“The dream,” he continued, “would be: get back with a club, smash it, go back to Ireland and undo all that scenario.”

The scenario in question involved leaving the squad under the pretence of having lost his grandmother. When the media established at the time that the woman in question had not died, Ireland said there had been a mix up and that it was his other grandmother who had passed away. It subsequently emerged that she too was alive and the player then said that he had needed to go home because his girlfriend had miscarried.

The incident is not revisited in any detail in this interview with only a suggestion that he had not expected to be caught out in his original lie to then manager Steve Staunton because he had not appreciated what a big story his departure would be.

Now, he suggests, his wider departure from the international stage after having scored four goals in just six appearances for his country, “came down to prioritising. Can I leave my kids for two weeks to play for Ireland? As much as I’d loved to have done that, I couldn’t. I was away at matches, stressed out of my head because of my kids. I had no support. I had to pick option A or option B.

“But of course, I wish things could have been different,” he continues. “Why wouldn’t I want to play for my country 150 times? Why wouldn’t I want to be an Irish hero? Who would turn their nose up at that? Why would it ever be my agenda to be disliked in Ireland? I had death threats, I had all sorts. Christ, I didn’t want to leave the way I did. I didn’t want to be disliked in my own country but it came out of circumstances which were tough.”

Ireland describes his time in the academy at Manchester City, where he made his name, as “the best years” of his life but also talks about a culture around the squad that could only really be described as bullying, something he and other young players struggled to cope with at times.

After establishing himself in the first team under Mark Hughes, however, and winning the club’s Player of the Year award in 2008/09, he seemed set for a glittering career. Instead, he fared far less well under new manager Roberto Mancini who, he says now, treated him less favourably because of his refusal to play for fellow Italian Giovanni Trapattoni and he never recovered his early momentum during his time at Aston Villa or Stoke City.

“Looking back, I really feel I was good enough to have stayed another six, seven or eight years at City”, says the Irish father of three, who will turn 34 in August.”

“He definitely had an issue with me, 100 per cent. Giovanni Trapattoni was the manager of Ireland at the time and they were best mates. Mancini kept saying to me, ‘Go back, go back. You need to go back to play’. I said to him, ‘Right now, I’m not even playing for Man City. That has to be my focus,’ but he wouldn’t let up.

“I was always first to team meetings because I was so good with timekeeping. I’d walk into the room and sometimes, it was only me and him there. I’d think, ‘Oh shit!’ - I knew what was coming. We might have a really important game the next day but he wouldn’t stop talking about me going back to Ireland. In the end, I said, ‘Look, get Trapattoni over here, we’ll sit down, have a coffee and try to hammer it out together’. It never happened though.”

In fact, Ireland had already met with Trapattoni once before then after which he accused the manager of “arrogance,” claiming that he had been kept waiting for 15 minutes as the veteran coach had repeatedly left the meeting to take calls on multiple mobile phones.

In an interview with French football magazine, SoFoot, in March 2011, Ireland suggested that the controversy that followed his initial departure from Staunton’s squad had been “a good excuse to retire”.

“Going away for three days to play in Andorra - I’ve got better things to do,” he said at the time.

1 Madigan’s primary goal is Ireland caps after switch to Ulster
2 Seán Moran: It won’t take much before cancelling All-Ireland looks like a solution
3 My sporting disappointment: Battered, bloodied, broken by The Wall
4 View from Melbourne: Sporting fabric of the city suffering from second lockdown
5 Atalanta hope to bring joy to Bergamo after city’s darkest hour
Real news has value SUBSCRIBE
Crossword Get access to over 6,000 interactive crosswords