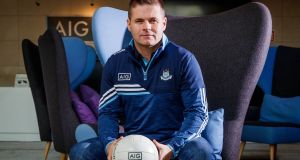 Dublin manager Dessie Farrell has confirmed that veteran goalkeeper and captain Stephen Cluxton is “very keen to stay involved” as he seeks to maintain the city team’s dazzling run of All-Ireland success.

Farrell takes charge of the All-Ireland champions for the first time in the O’Byrne Cup against Longford in Pearse Park on Saturday. However, it may be some time before Cluxton resumes his position between the posts as he recovers from surgery for a shoulder injury and Farrell indicated a provisional return date of March.

“I’ve met with Stephen and he’s indicated that he’s very keen to stay involved. A lot of you would be aware that he’s just after going through some surgery on his shoulder there, so that’s going to take some time to recover and he needs the time to rehab that.

“I think it was just that there was a little bit more to do on it than he thought, but we’d hope to see him back on the field towards the end of March, I think. “But he’s very keen and intent on staying involved and staking a claim.”

There had been speculation that the completion of the five-in-a-row last September would signal a changing of the guard for Dublin, with several senior players expected to retire. Eoghan O’Gara and Bernard Brogan did call it quits but so far, none of the other senior players have followed suit.

“No, they’re all involved, absolutely. At the end of any season or the beginning of a new season, for senior players it’s always a concern at the best of times as to what role you’re going to have going forward and particularly when there’s a new management team in place.

“I know what that feels like, I came through seven different managers, so I can understand how some of those more senior players might feel about it, and maybe that sense of uncertainty, but I think, in my view anyway, they’ve all been fantastic servants of Dublin football and under our watch they’re definitely going to get a chance to stake a claim and to impress the new management team.”

Farrell has yet to announce his management team and while he indicated that he has people in place, he preferred not to release their names until he has informed the squad, many of whom are still on team holiday.

“And I don’t mean to be awkward yet but with the lads being away and everything else, I’d prefer to fill them in first rather than sort of announce it in public, without letting them know. So there’s a timing thing around this and obviously they’re back over the next couple of days and will be back training next weekend, so I hope to be able to address the lads on that basis next week.

“We’re well down the road. Obviously given the sudden nature of Jim’s resignation over Christmas and the team and backroom team being away on holidays, there’s still a few bits and pieces to put together.”