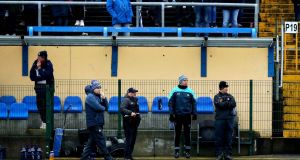 Dublin manager Dessie Farrell and his management team look on during the game against Longford. Photo: Ryan Byrne/Inpho

The Dessie Farrell era is officially underway though victory eluded the new Dublin manager in what proved a dramatic and unconventional O’Byrne Cup semi-final tie.

Leading by two points with 67 minutes played, Farrell’s experimental crew of rookies and former underage talents led by two points and eyed what would have been a creditable win in the circumstances.

None of the 2019 squad were involved - though Stephen Cluxton did attend the game - while the Sigerson Cup robbed Farrell of various other options, leading to him choosing arguably a third choice team.

In the end, three Longford points in a row including the winner from a Darren Gallagher free in the 74th minute secured the home team’s passage through to a final next weekend against Offaly.

Not that Farrell, who operated a rolling substitutes system and made 23 changes throughout, was overly concerned about the defeat, agreeing that it will be good to get down to business with his full squad in training now.

“There’s definitely a bit of that because we have to get back to work with the main group quickly,” said Farrell, who confirmed Mick Galvin as one of his selectors. “That will be our focus now and working towards the (National League) opener against Kerry in two weeks’ time.”

Farrell clearly guaranteed all of his travelling squad a chunk of game time because he introduced 10 substitutes in the first-half alone, making 13 more in the second-half.

Even with unlimited substitutions permitted in the pre-season tournament, it was a curious move with Killian O’Gara netting for Dublin in the 19th minute, only to be called ashore seconds later, the same fate that awaited Niall O’Callaghan, younger brother of Con, after he scored the second of his two-goal blast in the 50th minute.

With only a couple of training sessions beforehand, Dublin naturally took time to settle and trailed 0-4 to 0-1 with corner-back CJ Smith the unlikely first point scorer of the Farrell era in the 12th minute.

An entertaining and at times ratty game swung back and forth during the second-half though O’Callaghan’s two goals left Dublin in pole position until that late Longford trio of scores.

1 Winds of change as Ireland name a refreshed team, picked on form
2 Who is Caelan Doris? Meet Ireland’s newest rugby star
3 Gordon D’Arcy: If Farrell can tap into our self-worth, we’re all on a winner
4 Clongowes calmly restore order after Terenure’s terrific start
5 Sigerson Cup final: Pat Critchley looks to defy the odds against DCU
Real news has value SUBSCRIBE