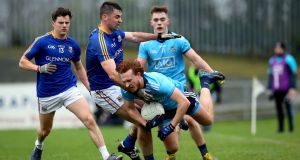 A game into his reign as Dublin senior manager and already Dessie Farrell has something painful in common with Jim Gavin; presiding over an O’Byrne Cup semi-final loss to Longford at Glennon Brothers Pearse Park.

Dublin’s previous loss there in 2016 was Gavin’s last in the O’Byrne Cup before handing over the January duties to Paul Clarke and perhaps Farrell will make a similar move in future seasons.

Not that Saturday’s result seemed to bother the former Dublin minor and U-21 manager too much, with their travelling supporters far more agitated.

One of them, standing on the terrace beneath the main press area, almost came to blows with a Longford supporter while later on, after Darren Gallagher kicked the winning point for Longford after winning a debatable free himself, Dublin supporters verbally abuse referee Alan Coyne as he exited the pitch.

In the end, it required the intervention of two gardaí and a couple of stewards to bring calm to an unseasonably combustible situation for the second weekend of January.

“It was soft,” agreed Farrell of the late free. “But it doesn’t really matter, to be honest. I was glad to we were competitive to see how players responded in that type of a cauldron.”

Next Saturday week’s Allianz League opener with Kerry at Croke Park, 133 days on from completing the five-in-a-row at the Kingdom’s expense, is uppermost in Farrell’s mind.

Avoiding an O’Byrne Cup final with Offaly next weekend may even suit Farrell who will begin pre-season training with his main squad tomorrow night and work intensely with them next weekend.

“We won’t go away, no,” said Farrell, ruling out any training camps. “We’ll train and we’ll have a couple of meetings for sure. There’s definitely a lot of work to do.”

Having declined to outline the identity of his backroom team at his first press conference on Friday, some light was shone on the issue in Longford. Mick Galvin, Farrell’s old ally in Dublin underage setups, was by his side as was Shane O’Hanlon, often referred to as the ‘logistics’ man in Gavin’s five-in-a-row setup. A bearded Bryan Cullen, Dublin GAA’s full-time strength and conditioning expert, put the players through their pre-match paces.

They gathered a group of rookies and former underage Dublin talents with CJ Smith, a defender from Lucan Sarsfields, the unlikely first point scorer of the Farrell era. Killian O’Gara scored the first goal and Niall O’Callaghan, younger brother of senior icon Con, added two more in the second half.

Some of the group will be retained for the league though exactly how much Farrell could learn from a game in which he made 23 switches – substitutions are unlimited in the O’Byrne Cup – is debatable.

“The intention is definitely to bring a couple of lads forward,” said Farrell, who admitted O’Callaghan could be among them. “He did very well, he has a sniff of that, for sure.”

As for taking his own first steps as senior manager, a relaxed-looking Farrell didn’t make much of it.

“It was great to get out on the pitch to be honest after the last couple of weeks,” he said. “Ultimately it’s about playing football and that started for us in earnest.”

Longford, lest we forget, were the victors and look in pretty good shape for a final against Offaly with Gallagher, Rian Brady and Kevin Diffley, all missing last season, scoring 1-10 between them.

“It’s a final, trophies don’t across the saddle board that often in this county, sadly,” said Longford manager Padraic Davis.

“If we’re in with a chance of winning a cup, whether it be the O’Byrne Cup or otherwise . . ..it’s 20 years since we’ve done it so we’re 75 minutes or so away from having a chance of doing it now, so we’ll certainly be giving it our best shot.”