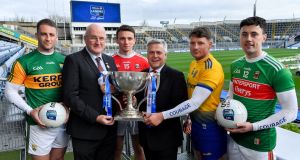 The advanced mark: it’s been tried and tested before only now that it’s here to stay – including championship 2020 and beyond – it’s seemingly struggling to find even one ardent supporter.

Some of the concerns were outlined by three leading football forwards attending the 2020 Allianz Football League launch in Croke Park, beginning with Mayo forward Diarmuid O’Connor.

“I was disappointed to see it coming in,” said O’Connor, Mayo beginning their league title defence away to Donegal on January 26th.

“I didn’t think there was a need for change but, listen, it’s in now, it is what it is and we just have to get on with it and practise it and make sure you’re good at it when the time comes.”

The new rule essentially extends the application of the existing mark to the clean catching of any ball on or inside the 20m line, from a kick delivered on or beyond the 45m line, without it touching the ground.

“I don’t know if there was too much of a change in last year’s league,” added O’Connor, “but the fact that we know it’s in for championship now they’ll probably be more emphasis on it in training. More lads will be practising frees, anyone could be a free-taker now if they catch a mark, so you might have a free to win a game so there’ll be more practising before and after training. Only time will tell how much it will change the game.

“Most of the lads I’ve talked to really didn’t see the need for change. I don’t know if we should be rewarding forwards for catching a ball, but as I said it’s in now and we just have to try and ensure we’re the best as can be at it.”

“Just going on the three or four matches we have played so far this year, it hasn’t made a massive difference,” he said. “I think we have played three, maybe four matches and there have only been one or two marks in them in total, which is surprising enough. Maybe, when the conditions pick up a bit better the ball might travel a bit further and you will get a couple more.

“At the moment, when you are playing, you are not really thinking about it. You are still giving that bounced pass, maybe, rather than the outside of the boot. But you know, definitely later on in the year, it could become important.”

It does allow for some further imagination, given the lateral kick will also count: “Exactly, once it travels 20 metres, it doesn’t matter from where you are kicking it in, but yeah, it will be interesting to see how it will work out and it is an added thing to the league this year, it does make things that bit more interesting.”

Kerry Stephen O’Brien stopped short of describing it as a “negative” move for Gaelic football, but had some reservations nonetheless.

“It’s a rule change, and we’ll have to try and take as much advantage out of it as we can,” he said. “We haven’t really done anything on it; it’s a thing that might suit us. Or it might not suit us as well because a lot of the time with the quality of the forwards we have inside there, if you get a kick-pass into them they are going to score anyway.

“But on the other side, we’ll have to work on it defensively as well to avoid easy scores given away. It’s going to be a big change for scoring and the scoring rules of the game so obviously it’s going to make an impact and we’ll have to just wait and see how we deal with it.

“So I don’t think it’s a negative change or anything like that; it might promote a bit of kicking and I’m not necessarily sure it needed to be made. I think if you receive a good kick-pass like that the scores are on a lot of the time anyway.

“Maybe it helps break down blanket defences, but maybe it could make things ultra-conservative as well And I think it takes away the battle of a forward against his man, which sometimes is the most exciting thing. When a fella gets a good ball and he is lined up one on one, and I think the defenders relish that as well, whereas now it’s a free-taking competition a lot of the time. It remains to be seen the impact on it.”

1 Winds of change as Ireland name a refreshed team, picked on form
2 Who is Caelan Doris? Meet Ireland’s newest rugby star
3 Dave Hannigan: Everyone believed they were on first name terms with Kobe Bryant
4 Kerr and Quinn to launch policy document on funding of Irish football
5 Holders UCC see off UCD to book spot in Fitzgibbon Cup semi-finals
Real news has value SUBSCRIBE

John Prenty: Cost of intercounty preparations a ‘runaway train’ 21:47
Kerr and Quinn to launch policy document on funding of Irish football 21:42
Mary Immaculate bring that little bit extra to edge out UL 21:19
Dave Hannigan: Everyone believed they were on first name terms with Kobe Bryant 21:00
Holders UCC see off UCD to book spot in Fitzgibbon Cup semi-finals 20:38
Crossword Get access to over 6,000 interactive crosswords