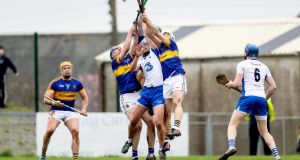 We’re only a fortnight into the Allianz Hurling League and whereas Division 1A is heading for one of its familiar logjams with just All-Ireland champions Tipperary on full points, Division 1B looks over and it’s Wexford that have done the dusting.

Even the most optimistic voices in the county couldn’t have anticipated that the appointment of David Fitzgerald as manager could have that sort of impact but having been drawn with the difficult opening two fixtures of Limerick and Galway, the favourites for the division’s notoriously competitive one promotion place, they have gone and won both.

The weekend’s victory in Galway saw them overcoming both the return of Joe Canning after long-term injury and a six-point deficit, opened up when he converted a second-half penalty after coming on as a replacement.

Wexford goalkeeper Mark Fanning goaled a penalty himself and Conor McDonald took charge in the closing exchanges and it was he who hit the winning points in an enthralling 1-21 to 3-13 victory.

The landscape for Wexford is straightforward: beat Kerry, Laois and Offaly – and they will be odds-on favourites to do so – and the county is returning to the top flight for the first time since 2011.

Division 1A is as helter-skelter as ever. Tipperary have won their first two matches – both away – and will fancy their chances of taking the league campaign into the quarter-finals, as they are the only team in the top division with a 100 per cent record.

Sunday’s victory in Walsh Park re-asserted their superiority over Waterford if not by the vast dimensions of last summer’s Munster final then by a decisive six points after a controlled display.

“It’s good to win,” said manager Michael Ryan. “That’s what we came to do, no more, no less. We knew it was going to be a titanic type battle to get a result down here. Waterford are a top team. We know that. This won’t be the end of the chapter between Tipp and Waterford for the year.

“It’s just a point in time in February so I wouldn’t get too excited. We’ll take away the points, they’re valuable to us. But the year is but a pup.”

A goal by All Star John McGrath in the 58th minute put the result to bed for Tipperary after a tense first half, which saw the teams level on 10 occasions.

Ryan, having made five changes to the team that walloped Dublin on the first weekend, said that he was pleased with the performances of some of his fringe players and picked out former football star Steven O’Brien, who scored two points from wing forward and corner back Joe O’Dwyer.

“I’d be happy with their progress to date. They’re trying to get to a really high level, particularly Steven (O’Brien), who’s coming in from football, while Joe (O’Dwyer) has probably never been away, playing high-quality hurling with Killenaule. It’s a longer, harder journey for Steven. It’s a work in progress.”

He was hopeful that they can feature in the championship later this year.

“I hope so because it’ll augur well for the group if they can. I thought there were good performances all round, Donagh Maher was good at two; Joe O’Dwyer played well. Séamus Kennedy got [TG4] man of the match and he hadn’t played last week. Our goalie [Darragh Mooney] pulled off a great save [from Shane Bennett]. These are very small margins. It could have gone any way.”

All-Ireland finalists Kilkenny find themselves marooned at the bottom of the division after an emphatic defeat by league holders Clare in Ennis. Having already lost at home to Waterford, the Leinster champions are pointless after two rounds.

The home side under the new management of Donal Maloney and Gerry O’Connor this season put the opening night defeat by Cork behind them with a much improved defensive display in comprehensive 13-point win.

Outscoring their opponents by 1-8 to 0-1 in the 18 minutes after goalkeeper Donal Tuohy saved a penalty from TJ Reid, Clare ran out 2-19 to 0-12 winners. They face Tipperary next, in Thurles the weekend after next.