Underdogs diary: meet the panel set to take on Dublin 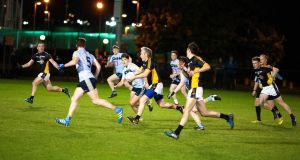 Blake Forkan (St Eunan’s, Donegal): Blake’s hero is Shane Curran, although until now that’s a secret he’s kept between just the two of us. He’s a goalkeeper who loves running up the field with the ball, he’s played in an All-Ireland junior final for Mayo but now lives and plays up in Donegal.

Darragh O’Shea (Ballydonoghue, Kerry): Darragh is having quite the year, he won a junior All-Ireland with Kerry between the sticks and was their third choice on the senior panel. He’s also from a place in the Kingdom entirely dedicated to the Donoghues.

DJ Murphy (Gneeveguilla, Kerry): Another Kerry man with a junior All-Ireland medal. This lad is your typical ball playing corner back from the Kingdom, who has also been impressing for East Kerry in their senior championship.

Sam McCurdy (O’Dwyers, Dublin): From a small club in Balbriggan, Sam is the youngest member of the squad. He actually missed the first camp because he was doing his leaving cert! He’s gone from hanging on to his place in the panel, to being one of the standout performers in our last match.

Graham Heavey (Ballyboden St Enda’s, Dublin): I actually first saw the Ballyboden clubman playing at full-back for the Dublin minor team against Kildare in 2010, he’s the same age as myself (26). He’s had a few injury setbacks but when he’s fit he plays on the edge and is a quality defender.

Ruairí Cunningham (Clonmore Robert Emmets, Armagh): We had a sports psychologist describe the difference between what the All Blacks call a blue head and a red head. This lad is a red head in every sense. He gives it everything and has been arguably our most consistent performer.

Trevor Murtagh (St Barry’s, Roscommon): My fellow Rossie. Trevor is the sort of fella who would run through a wall and go again. He’s improved literally session upon session, an honest lad and a good footballer, I really hope he can overcome his injury to play a part against Dublin.

Ciarán Mac Fhearghusa (Na Gaeil Óga, Dublin): The founder of Na Gaeil Óga, Dublin’s Irish speaking GAA club. The yoga instructor is the oldest, yet still one of the fittest on the squad. He’s played for the Dublin juniors and remains a very good defender.

Anthony Durney (Moorefield, Kildare): Centre half back on the Moorefield team, the reigning Leinster club champions, he’s a great leader and certainly one to watch on Friday and in the future.

Adam Wilson (Scoil Uí Chonaill, Dublin): “Willo” as we call him is, like Anthony, an army man. He’s a very tidy defender and was one of the standout players from the first trials. That’s where he first showed us his vibrating foam roller, quipping that in a few years they’ll have them outside of Dublin too.

Steven Scallan (O’Loughlin Gaels, Kilkenny): Steven captained the Kilkenny minors to a 70 point defeat three years ago, and he’s determined not to be remembered by that loss. He gained confidence from starting on a strong Maynooth freshers team and has been one of the squad’s most committed players.

Enda Fleming (Corofin, Galway): From a club who know winning better than most, Corofin’s Enda Fleming is one of two Galway men on the squad and one of seven from the west. The inked up defender was one of the players to show the most improvements in the fitness re-testing and is another who has shown massive commitment.

Ryan Treanor (Thomas Clarke’s, Tyrone): One of two Tyrone men on the squad, he took great satisfaction out of the trip to Kerry and even got his Tyrone jersey out during it. He’s a lover of endurance running, a gentleman and one of the big personalities who knit the whole squad together.

Colm Flynn (Ballymahon, Longford): Colm has given everything to his native club Ballymahon, and his county over the years. He’s played underage and junior for Longford and was on their senior squad for several years but never made a championship appearance. Longford have had good players around the middle, but he’ll show in Parnell Park what an oversight they’ve made.

Eamon Donoghue (Padraig Pearses, Roscommon): That’s me. I write words for The Irish Times and kick ball for Padraig Pearses, in Roscommon – for whom I’ve so far represented at all grades except for senior.

Seán Brady (Ballymaguigan, Derry): Seán is a versatile and experienced player who has lined out for Derry in numerous national league matches but never got the nod for senior championship. He’s also the star of both the Ballymaguigan team who reached the intermediate final in Derry, and our whatsapp group!

Nigel Rabbitt (Abbeylara, Longford): A very talented forward who has a big reputation in Longford where he’s impressed playing for their underage and junior teams. He’s also a key player on the Abbeylara team who reached this year’s senior county final.

Fintan Ó Cuanaigh (St James, Galway): The selectors love Fintan because he’s a great player, and the producers love him even more because the Connemara native is a fluent Irish speaker. He’s played under-21 and junior for Galway and will play senior in the near future.

Micheál McCarville (Scotstown, Monaghan): The Scotstown native is from a strong football family and has an Ulster minor and Under-21 medal with Monaghan. He robbed me of best dressed when I arrived late at the Killarney races, but was definitely a deserved second best.

Michael Molloy (John Mitchels, Liverpool): This man has been travelling over from Liverpool for the camps, where the crossfit enthusiast and his wife run their own gym (LivFIt Personal Training). The Donegal native, who played for Kilcar for years, was the go-to man when John Mitchels reached the All-Ireland junior final in 2015.

Niall Canning (Drumcliff Rosses Point, Sligo): Niall is a two footed, athletic half forward with huge enthusiasm for the game, and the craic. He helps run one of the country’s most successful Charolais herds, Sagesse Charolais, who have won an All-Ireland every year since 2009. His honesty in talking about the death of his mother in the first show was incredibly brave and he’s doing a great job of making her proud.

Calum Gallagher (Naomh Bríd, Donegal): The Donegal native is the son of 1992 All-Ireland winning defender Matt Gallagher. He’s represented his county at underage level and was captain of Letterkenny IT in this year’s Trench Cup. He nearly broke through the roof in the countermovement jump test in Athlone.

Ronan O’Neill (Derrytresk GFC, Tyrone): Ronan can play midfield, full forward, in the half forward line – and no matter where you put him he ends up scoring a goal. His Derrytresk club were in the headlines for all the wrong reasons after the junior club All-Ireland semi-final in 2012, and he’s out to rectify those perceptions.

Stephen Harford (Round Towers Lusk, Dublin): One of five Dublin players on the squad, Stephen is almost as big a fan of Jim Gavin’s team as Willo is, and will relish the chance to take them on. The big full forward – who has played a lot of rugby in the past – set up the Eindhoven Shamrocks GAA club in the Netherlands and he drives a motorbike!

Cormac Doohan (Ballaghaderreen, Mayo/Roscommon): The Ballaghaderreen native was on fire for the Mayo juniors who beat Roscommon earlier this year, scoring 1-3 against a defence made up of senior regulars. The only problem was that being from Ballagh, he was wearing the wrong colours, his address says Roscommon.

Daragh Murrin (Duninkeely, Donegal): One of the youngest lads on the panel, along with Calum he’s really clocked up the mileage during this Underdogs journey. He was on the Donegal minors in 2017 and is another very versatile attacker.

Conor McKenna (Éire Óg Doire Achaidh, Antrim): An absolute machine in the endurance tests, Conor has played underage for Antrim and was with this year’s senior panel before being dropped after the McKenna Cup. He’s out to show that was not the right decision.

Gary O’Daly (St Mary’s, Leitrim): Gary played minor football for Roscommon before switching across to St Mary’s in Leitrim for an improved standard of club football. He switched from a junior club to a senior one. St Mary’s got to the semi-finals of this year’s championship and like a number of the squad he has been doing a great job of balancing the two commitments.

Richie Greene (Athlone, Westmeath): The Athlone man loves only one thing better than scoring and that is talking. About his scoring mainly. A lovely lad who, as revealed in episode two, suffers from epilepsy but has continued to play on such is his love of the game.

TG4’s Underdogs series follows the journey of some of the best club players from around the country as they prepare to take on Dublin this Friday, October 19th. To be eligible players (over 18) must have never previously played intercounty senior championship football. Episode seven is at 9.30pm on Thursday with live coverage of the game against Dublin the following evening from 7.20pm.