Darran O’Sullivan joins Kerry exodus and hangs up his boots

‘A Croke Park player. His explosive all action style meant he was fan favourite from the off’ 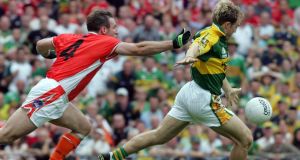 Darran O’Sullivan of Kerry on his way to scoring against Armagh in 2006. Photograph: Andrew Paton/Inpho

Kerry’s Darran O’Sullivan has retired from inter-county football with four All-Ireland medals and an All Star.

He joins Donnchadh Walsh, Kieran Donaghy and Anthony Maher in stepping away in recent weeks.

He has 10 Munster medals, captained Kerry to Sam Maguire in 2009 and won his All-Star in 2011. The 32-year-old speedster, however, has had the latter stages of his career plagued with injuries.

Former Kerry manager Éamonn Fitzmaurice has described O’Sullivan as “a Croke Park player and on many occasions he has been a trump card for Kerry memorably scoring the decisive goal against Armagh in 2006.

“His best season was 2011 when he terrorised defences throughout the year and scored an outrageously instinctive goal against Limerick. His personality and leadership skills will be missed from the dressing room.

“His explosive all action style meant he was a fan favourite from the off and right up until his last appearance against Kildare in this years championship he has excited people every time he touched the ball.”

While Jack O’Connor, who gave O’Sullivan his debut in 2005, added: “Darran was a very difficult man to nail down because of his pace and low centre of gravity. He was a great leader in 2009 when he had the honour of captaining Kerry and bringing the Sam Maguire back to his native Glenbeigh/Glencar.

“In his latter years injury has curtailed his appearances but he can be very proud of his contribution to Kerry football. He got us out of many a tight corner and he will be fondly remembered by the Kerry supporters.”

While O’Sullivan himself released a statement on Tuesday morning, in which he described his 14 years with the Kerry seniors as “the greatest period of my life.

“During my 14 years involved, I got to play under former teammates and some of my idols and I was always encouraged to express myself on the pitch. Every management team had their own style, but the one constant was always a huge love and respect for the traditions of Kerry football and it’s something that filtered into everyone in the dressing room. I didn’t want to single anyone out, but I do want to thank Jack O’Connor who placed huge faith in me by bringing me straight in from minors and handing me my debut in the 2005 All-Ireland final.

“I probably spent more time with the medical team than I would have wanted to in recent years, but I am grateful for the time and effort spent by them in helping to prolong my career.

“Nothing will replace the feeling I got when I would hear you all erupt as we entered the field. I look forward to joining you and cheering on the next generation to glory.”