Donegal’s Yvonne Bonner very much up for Down Under 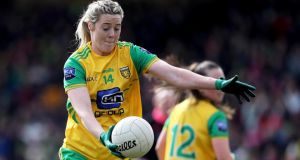 Yvonne Bonner would be forgiven for not knowing if she is coming or going, the past few weeks dizzying for the Donegal footballer. After a demanding year with the county, their All-Ireland journey taking them to the semi-finals for the first time, she thought she would be winding down by now, club duties with Glenfin her only focus. But then she got a message on Facebook.

“And I wouldn’t be too well up on social media, I don’t use it all that much,” she says, “so the message was sitting there for a long time before I saw it.”

It was from Lauren Spark, a player with Australian Rules club Western Bulldogs, who is one of the driving forces behind CrossCoders, a programme that offers international players from other sports the opportunity to win a professional contract with an Australian Football League club.

And as one of the most prolific forwards in Gaelic football since she made her senior debut for Donegal in 2002 – her form in 2018 earning her an All-Star nomination – Bonner was an obvious pick for Spark to invite to a CrossCoders trial.

A few Skype calls later, and Bonner was on her way to Melbourne for a five-day camp along with 10 other Irish sportswomen from Gaelic football, rugby and camogie backgrounds. Greater Western Sydney Giants coach Alan Connell liked what he saw from her during the trial, and before she knew it she was flying to Sydney to sign a one-year contract to play for the club.

“Surreal,” she laughs. “As I said to everyone, the age of me to be going out there – when I should be finishing up, I’m only starting.”

And lest the 31-year-old wasn’t dizzy enough, having arrived home from Australia on the Saturday, she was turning out for Glenfin in their Ulster club championship quarter-final the following day. And contributing 2-4 to their victory over Cavan’s Lurgan.

She will be in action again in Saturday’s semi-final against Down champions Bredagh, so for now she is concentrating on the round rather than the oval ball. However, next month she and husband Paul will set off for Sydney, where she will begin her AFL adventure.

“It’s all been a roller coaster, really,” she says. “Everything happened so quickly. I remember watching the documentary on Cora [Staunton] last month, and just thinking what an exciting challenge and experience it looked, and now to think I’ll be playing alongside her for Sydney in the new season…it’s crazy.

“I just know her from playing against her, but we were always at opposite ends of the field. It’ll be nice to get to know her, and it’ll be great to play along with her.

“I’m sure Cora’s success with Sydney last season would have influenced the coaches out there. She really showed how the skills are transferable, so that opened their eyes to the potential of Gaelic players. Collingwood have signed up Sarah Rowe [Mayo] and Ailish Considine [Clare] will be playing with the Adelaide Crows, so it’s a brilliant opportunity for all of us.

“And the good thing is you don’t miss out on too much with your county. Pre-season in Australia starts in November, and then the season itself is just February and March. It’s great that we can fit it all in. It’s not taking anything away from the GAA at home. And what we learn there we can take home with us, bring it back into our own set-ups.

“Growing up I never imagined having the chance to play sport professionally. The only possibility really was soccer, but as a Gaelic footballer it just wasn’t an option at all. I suppose it can happen that way, if you’re not waiting for things to happen an opportunity can suddenly come along, and I’m just so excited about it.”

And she is no stranger to Sydney. She lived there with Paul for three years up to April 2015, earning her living driving dump trucks on building sites around the city. Yet they both missed home too much to stay, and she was desperate to get back playing for Donegal.

“We really didn’t plan to stay that long, but one year led in to the next. I loved it, but I always missed back home and family especially – and both myself and Paul are big family people.

“So this is perfect, a short period, I won’t get too homesick, I’m getting the best of both worlds. It’s something I really couldn’t pass up on. Summer in two countries too – and it’ll be nice to get away from the winter back home,” she laughs.

“Paul is fully supportive, as he always has been through everything, even though I’m out every night of the week training. But he’s really excited about heading out again.

“We have friends and family over there as well, so it’ll make the transition a wee bit easier, slipping back into the lifestyle we once had.”

For now she’s trying to put her Australian adventure to the back of her mind, her thoughts focusing on Glenfin and Saturday’s Ulster semi-final.

“The support has been overwhelming from everyone in the community. They were all delighted for me to get this opportunity, and I’m just glad to be doing the parish proud. If we could go all the way in Ulster, and maybe even beyond, that would be the perfect send-off. It’s been a year I’ll never forget.”