Tyrone face Derry in Ulster preliminary round, Galway and Mayo could meet in final 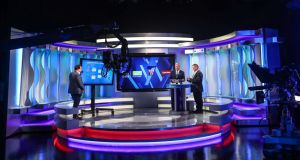 The 2019 Football Championship draw was made on RTE on Thursday night. Photograph: James Crombie/Inpho

Dublin will begin their Leinster and All-Ireland football championship defence against the winners of Louth and Wexford.

Last year’s All-Ireland finalists, Tyrone, will face local rivals Derry in the Ulster preliminary round. The winner will take on Antrim in the quarter-final. On the other side of the draw will be Down, Armagh, Fermanagh and Donegal.

In Connacht, assuming Galway and Mayo overcome their respective trips to London and New York, the Tribesmen will face Sligo in one semi-final. And James Horan’s Mayo will face the winner of Roscommon and Leitrim in the other.

In Munster, Kerry and Cork are set up to meet in another provincial final. Peter Keane’s first championship match in charge of the Kingdom will be against the winner of Clare and Waterford. While if Tipperary can overcome Limerick they’ll renew rivalries with Cork in the other semi-final.

The Connacht Football Championship draw has kept Mayo and Galway apart, so there's the prospect of a final showdown between the two heavyweights. Watch the draw live on RTÉ2 and online at https://t.co/lZE8y1QKCr #rtegaa pic.twitter.com/FFVa58bZOz

The Leinster Football Championship sees Dublin take on either Louth or Wexford with Meath, Laois and Carlow all on the other side of the draw. #rtegaa pic.twitter.com/ybgWO9JHri

The Munster Football Championship draw has kept Cork and Kerry apart, so that the first time they can meet will be in the final. #rtegaa pic.twitter.com/FTYiZEEHe8

The Ulster Football Championship has thrown up some very intriguing clashes, not least the preliminary round clash between Tyrone and Derry. They're joined by Fermanagh, Donegal and Antirm all on the same side of the draw. #rtegaa pic.twitter.com/6QcGSKALdY