Stillorgan side see off Ballyboden St Enda’s at Parnell Park 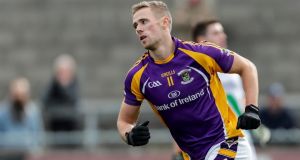 Paul Mannion scored three points as Kilmacud Crokes booked a place in the Dublin SFC Final with a victory over the Ballyboden St Enda’s at Parnell Park. Photograph: Laszlo Geczo/Inpho

Kilmacud Crokes advanced to the Dublin Senior Football Championship decider for the first time since 2012, after they secured a hard-earned six-point triumph over Ballyboden St Enda’s at Parnell Park on Saturday.

In a precursor to the county hurling final between the same two clubs, opening period goals from Craig Dias and Shane Horan offered Crokes a decisive edge in a tentative penultimate round affair.

The Stillorgan men enjoyed the best possible start to the contest as midfielder Dias found the back of the net inside the opening minute. Boden quickly responded through Dublin panellist Colm Basquel, who was joined in attack by brother Ryan.

Anthony Rainbow’s men were guilty of wasting opportunities as the half progressed, however, which in turn allowed Crokes to re-establish their authority. Following swapped frees between Paul Mannion and Colm Basquel, Andy McGowan split the posts with the outside of his right boot.

A lung-bursting run by the marauding defender subsequently set-up Horan for Crokes’ second goal on 26 minutes and Dara Mullins’s excellent point provided them with a 2-4 to 0-5 interval advantage.

Crokes remained in control on the resumption thanks to unanswered efforts by Shane Cunningham and the lively Mannion, with Sky Blues defender Cian O’Sullivan proving to be a steadying influence at the heart of their defence.

Boden had their own intercounty star in the shape of six-time All-Ireland winner Michael Darragh Macauley, while dual player Conal Keaney was also a prominent figure as they launched a spirited second-period fightback.

However, it was the ever-dangerous Basquels who continued to lead the way for the Firhouse Road outfit in the scoring stakes. Ryan’s superb point on the left wing preceded Colm’s two-point salvo, edging the four-time champions a step closer to their southside rivals.

A fourth point for Ryan on 52 minutes made it eight in total for the impressive siblings, but in a similar vein to their quarter-final success against St Sylvester’s, Crokes produced a strong finish to get themselves over the line.

Mannion, Cian O’Connor and McGowan all found the target to ease Kilmacud into a forthcoming decider against either St Vincent’s and St Jude’s, who meet in Sunday’s second semi-final at the same venue.