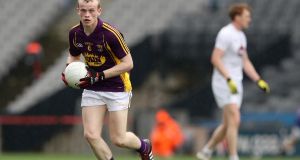 Simon Donohoe was the hero for Shelmaliers in the Wexford SFC final. Photograph: Ryan Byrne/Inpho

Kilanerin had to survive a dramatic Shelmaliers finish that saw the outstanding Simon Donohoe kick the levelling point three minutes into additional time in a thrilling Wexford SFC final at Innovate Wexford.

When Craig McCabe pointed a 59th minute free, still two points separated the sides. Immediately on the kick-out Wexford inter-county hurler Simon Donohoe narrowed the gap to the minimum, and with the second last kick of the game, three minutes into additional time and after a McCabe 40-metre free had dropped short, it was Donohoe who lofted over a dramatic levelling point in a packed goalmouth.

Shelmaliers hit their stride early on with Eoin Doyle kicking two points inside the opening six minutes. Kilanerin were struggling through the opening passages of play, but quickfire points from Niall Hughes and Maty Forde had the sides level, 0-2 each after ten minutes.

It was now Kilanerin who had assumed control as play swung from end-to-end with points from Hughes and Ford, before the veteran Forde finished a cross to the net, as the game was transformed, with Kilanerin now leading 1-4 to 0-2 after 23 minutes.

But in a dramatic two minute spell, Shelmaliers responded with goals from Simon Donohoe, a great run through the defence and finish to the corner of the net, and A J Lehane. But with Forde kicking over two great points from play the sides went in level, 2-3 to 1-6 at the interval.

During a slick third quarter little separated the sides at the end of which they were still deadlocked 2-6 to 1-9, but two excellent Simon Donohoe points had the Shels leading going into the closing 12 minutes. But it was Kilanerin who snapped back with a Forde pointed free, before Niall Hughes drove through the centre of defence to fire home a great goal, leaving his side leading 2-11 to 2-8. Now in a desperate effort to retrieve the situation it was the Shels who pushed forward with those three late points forcing a dramatic draw.