TV View: After all the talk of hurling modernity, it’s looking like an old-school final 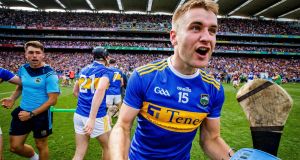 RTÉ billed All-Ireland hurling semi-final weekend as old-school establishment versus modern revolutionary. It turned into a dizzying reminder of how advancement and improvement aren’t necessarily the same thing.

“Limerick aren’t a bit like the old Limerick team,” Cyril Farrell announced beforehand. “In our time Limerick would be ‘hip and whip’. The ball would be flying. Now it’s very controlled.”

Limerick’s scientific backroom team had a “strong belief in terms of skill development through game-based training” while their manager is, apparently, “able to operate the left and right hand side of the brain”.

So, with John Kiely’s Limerick firmly in the modernist corner, the narrative left little else for Brian Cody’s Kilkenny but to wear a throwback hat.

Jackie Tyrell, Cody’s former lieutenant, gamely lobbed one “empower” into his description of the Kilkenny boss.

But there was no mistaking RTÉ’s determination to paint it as new versus old, tactic versus tradition, a fading empire about to be brushed aside by the shiny new rising power.

So when Kilkenny tore up the script by relying on old hurling staples such as pressure, stick-work and a frenzied refusal to allow Limerick go all “Barça” with the passing, rapid rewriting was required.

“We spoke about Kilkenny’s savagery that they bring to the table, but they also brought serious tactical nous,” ventured Cusack at half-time.

Maybe they did, too, but at the end it felt like old-fashioned grit propelled hurling’s aristocrats over the line, leaving Cody to relish what Tyrell suspected might be his greatest achievement of all.

There was a late attempt to drum up some dudgeon over a last-minute sideline ball that looked like it should have resulted in a 65 – which might have drawn the match.

Cusack argued Limerick’s players deserved more and that “technology” would have clarified the situation. But it jarred with a reassuringly atavistic tenor about a vintage hurling day.

In the early stages Tipp’s mercurial stick-work and capacity for outrageous scores kept them in it. But even Hawk-Eye looked to be on Wexford’s side. Tipp had a goal ruled out and a point added against them in the space of 32 seconds.

When Wexford goaled and went five points up, Tipp’s goose looked not so much cooked as burnt to a crisp

The impetus behind greater use of technology was underlined when most of the attention on the incident centred on complaints that 32 seconds was too long to wait.

Yet ultimately the whole thing pivoted on a moment of plain old humanity.

Michael Duignan described John McGrath’s 45th-minute sending-off for a swing across an opponent as a “stupid card”. He wasn’t wrong. When Wexford goaled and went five points up, Tipp’s goose looked not so much cooked as burnt to a crisp.

A shot of McGrath sitting in the stand in tears felt almost intrusive, but also illustrative of the mountain Tipperary had to climb.

Even a literal-minded ref with little appreciation of the GAA’s sacred advantage rule couldn’t knock them off track. All the pure hurling of Callinan and co came to the fore. And it wouldn’t have counted for anything without the same blood-and-guts defiance Kilkenny had shown the day before.

Afterwards Ken McGrath called it the best second half he’d ever seen. Anyone with a sporting heartbeat would have been hard-pushed to argue with him.

“And after all this talk of an evolution in hurling in 2019, the All-Ireland final will be between Kilkenny and Tipperary,” summed up Joanne Cantwell at the end of an epic weekend.

It’s a pairing to inspire nostalgia among traditionalists. But even the trendiest hurling minds might agree it’s reassurance that some things never go out of fashion.

There was nostalgia, too, after Friday’s 19th stage of the Tour de France was bizarrely curtailed due a freak hail shower that effectively made the Alpine road impassable. Pictures of JCBs pushing away slush while everywhere else in France basted in 40-degree heat made headlines worldwide.

There was general, albeit reluctant, acceptance that the organisers called it right in cancelling the last 20 miles of the stage. But on Eurosport Sir Bradley Wiggins was in trooper mode.

Warmly tucked up in a Liam Gallagher-like parka, Wiggins looked as frustrated as a Mod in a world of Rockers

Warmly tucked up in a Liam Gallagher-like parka, Wiggins wheeled around words such as wimp but still looked as frustrated as a Mod with a moped in a world of Rockers.

These days Carrick-on-Suir’s own Sean Kelly employs a lot more words in his media role than he ever did in his cycling pomp. Nevertheless, he only ventured a middle-of-the-road “frustraaaayted” when pressed as to what the riders’ feelings might be about the stage cancellation.

“Sean would have ridden through it!” interjected Sir Wiggo.