Killarney Legion living the dream after 43 years of pain 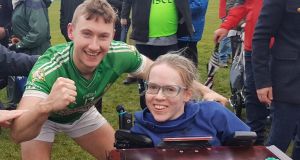 You’ve all heard about the four falls of Buffalo? The infamous ESPN 30 for 30 where they delve into the four-time consecutive Super Bowl finalists and losers, the 1990s Buffalo Bills. Buffalo’s four trips to the Super Bowl did what only sport can do, and show how misfortune brings some communities “closer together” even as it also breaks others open.

Buffalo’s four losses were all incredibly different from one another. From Scott Norwood’s 47-yard field goal miss at the end of Super Bowl XXV to Thurman Thomas misplacing his helmet at the start of Super Bowl XXVI, and Don Beebe’s strip of Leon Lett’s attempted fumble return in Super Bowl XXVII, each loss had a storyline worthy of its own documentary.

The four falls always resonated with me when I sat through consecutive losses to my adopted club Killarney Legion. Just like Buffalo, every year Killarney had fans waiting in anticipation to be only denied by cruel fate. From a missed free kick in an East Kerry final to Rathmore to being entirely outclassed by Rathmore a year prior, to watching legendary Kerry midfielder Bryan Sheehan bring South Kerry back from the dead in a county final replay.

Bills became an acronym for Boy, I Love Losing Super Bowls. Fitzgerald Stadium, for my father and I, became a place of misery and despair. Looking out at the stunning scenery of the mountains and St Finian’s Hospital, my father’s declaration for the decade was, “We will never leave Fitzgerald Stadium happy”. The Bills may love losing Super Bowls, but Joanne and co hated the almost annual trip to Killarney.

History is not always written by the victors and as Don Draper in Mad Men once said, “Nostalgia literally means the pain from an old wound. A tinge in your heart far more powerful than memories alone. It takes us to a place where we ache to go again.”

There was, whether the team wanted to admit it or not, only one place Killarney Legion and its followers wanted to go. On to another final, maybe for more misery, but just in case that sweet taste of victory was bestowed upon them. The heart attack pack, the cardiac crew and the failures of Killarney would always go again. Just like Buffalo, losing four major finals takes its tow on anybody, let alone a team.

It got so traumatic, my own family members would send me Simpsons memes, from Homer yelling “Hurry up and lose so we can get out of here” to the episode where the little league baseball association replayed a final over and over again until Bart caught the game-winning ball. As Milhouse reminded Bart in his old age “just the 78 times” was all it took for Bart to catch the game-winning ball.

But, unlike Bart, Buffalo, the Springfield Isotopes and the years of misery in Fitzgerald Stadium, finally, my father and I left the wintery scenes with happy tears in our eyes. After 43 years of waiting, a decade filled with pain and heartbreak, there were finally tears of joy from fans and players on Sunday. Killarney Legion had finally beaten their noisy and unruly neighbours Dr Crokes and captured East Kerry glory, the first time since 1976, where, James O’ Donoghue’s father, Diarmuid was a little 17-year-old scoring three points from play.

The other connection between the team that can’t be forgotten is Weeshie Fogarty. Fogarty is synonymous with Killarney Legion. An ordinary man who did extraordinary things and reported on it in such an extraordinary way. The victory was made all the more poignant knowing he was definitely commentating on it from above, summarising past failures and rejoicing in the current victory.

They say football really is not a matter of life or death. Bill Shankly would say it’s much more than that. But, footballers really don’t save lives, and in the miserable moments, life and football simultaneously move on.

Ninety-eight per cent of football really is about dealing with failure and coming back in order to overcome it. It’s about finding joy and finding something to smile about the day after a catastrophe. It’s also the best example when explaining to people how goals and achievements can only be reached as a successful team coming together as one.

Jürgen Klopp said in his players’ tribute piece after this year’s Champions League victory, “Football is the only thing more inspiring than the cinema. You wake up in the morning, and the magic was all real. You actually knocked down Drago. It really happened.”

1 Winds of change as Ireland name a refreshed team, picked on form
2 Who is Caelan Doris? Meet Ireland’s newest rugby star
3 Dave Hannigan: Everyone believed they were on first name terms with Kobe Bryant
4 Holders UCC see off UCD to book spot in Fitzgibbon Cup semi-finals
5 Gordon D’Arcy: If Farrell can tap into our self-worth, we’re all on a winner
Real news has value SUBSCRIBE

Kerr and Quinn to launch policy document on funding of Irish football 21:42
Mary Immaculate bring that little bit extra to edge out UL 21:19
Dave Hannigan: Everyone believed they were on first name terms with Kobe Bryant 21:00
Holders UCC see off UCD to book spot in Fitzgibbon Cup semi-finals 20:38
Women’s hockey tour of South Africa ends with loss to Germany 19:49
Crossword Get access to over 6,000 interactive crosswords