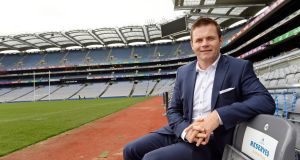 Dessie Farrell’s appointment as Dublin manager is the apex of an involvement with the county, which stretches back over 30 years. Forty-eight last June, he was on the 1988 minor team that lost the All-Ireland final to Kerry - he scored 8-7 in four matches during that campaign - and went on to have a 13-year career at senior level, winning all honours in the game.

Injury disrupted his career but he was a key member of the team that won the 1995 All-Ireland, moving from a straightforward shooting role at corner forward to operate on the half-forward line either as an orthodox, play-making centre forward or in a frequent switch with Paul Clarke, an attacking wing forward.

He was an All Star in 1995 and a short-list pick for Footballer of the Year.

A versatile sportsman, he played hockey at underage for Ireland, won a secondary schools soccer medal with St Vincent’s under the guidance of current GAA president John Horan, loved hurling but always shone at football.

At primary school, he had caused bother to a future sports celebrity in a Cumann na mBunscoil final.

“Dessie was surprisingly fast and soloed the ball literally six inches off the ground,” recalled golfer Pádraig Harrington on Today FM four years ago. “I couldn’t get down to him! It was a technical error on our behalf. I was full back and I was moved out to centre back to mark him. And it was a big mistake because I didn’t have the ability to keep up with him.”

As a schoolboy he was also accomplished academically, winning Student of the Year in his final term but by his own account in the autobiography ‘Tangled Up in Blue,’ didn’t enjoy college life in Kevin Street (now part of TUD) and when his father Seán had to stop working for health reasons, Dessie decided to follow him into psychiatric nursing and start earning a living.

As his sporting profile grew, he was able to combine it with his paramedical experience and worked in sales for a number of pharmaceutical companies before becoming the full-time head of the Gaelic Players Association, a post he held from 2008 to 2016, having held the role in a voluntary capacity from the early days of the players’ union, of which he was a founder member.

The status of the GPA was very different two decades ago and for Farrell it was a constant battle for recognition and to defuse the hostility of the administrative GAA in Croke Park.

His quiet, undramatic demeanour helped the fledgling organisation gain a measure of acceptance and he also got on well with Croke Park’s then Player Welfare Manager Páraic Duffy, who would subsequently become director general. In late 2009, the GPA formally became part of the national administration in Croke Park.

Dónal Cusack, who served with Farrell as GPA chairman and founding member, said of him: “it was my pleasure and privilege to have known and worked with Dessie Farrell for so many years. We fought many battles side by side and his passion, his integrity, his loyalty and his sense of right made the lives of all inter-county players a little easier. I owe Dessie a great debt as do, the GPA, all inter county players and the GAA generally”.

After leaving the GPA he set up Compete with Compassion, a business consultancy and performance coaching enterprise.

His coaching credentials are well established at first with development squads and then when he enjoyed considerable success with under-age Dublin teams, winning in 2012 the county’s only All-Ireland minor championship in 35 years before following up with under-21 titles with two different cohorts in 2014 and ‘17.

There were also low points and Tipperary twice blighted the fortunes of Farrell’s teams - once in the famous minor All-Ireland final of 2011 with a late goal and four years later in an under-21 semi-final.

The setbacks steeled the players involved and with many of them involved now in the Dublin seniors, they will be familiar with each other: future players included Ciarán Kilkenny Eric Lowndes, John Small, Jack McCaffrey, Brian Fenton, Niall Scully, Paul Mannion, Cormac Costello and later Eoin Murchan, Brian Howard and Con O’Callaghan.

Farrell now faces into his biggest challenge, steering a course between the dismissal of success because of the resources at his disposal and the disapproval of failure

In the wake of last year’s four-in-a-row, Kilkenny paid tribute to Farrell as one of those who had shaped his football career.

“I suppose from our perspective at under-age level Dessie Farrell would have a massive influence on us and I suppose it is testament that a lot of guys who went on played for Dublin are back and giving their own time to help out.

“When I was under-13, I was fortunate that Dessie took over our under-13 team . . . . and to have him as a role model and a coach from under-13 all the way up to minor was incredible.

“Then obviously he would have been manager of the year previous. They had a great bunch of players as well - the likes of David Byrne, Niall Scully, Cormac Costello’s, Conor McHugh and other guys as well. We developed such a bond, I remember when we lost that All-Ireland final against Tipperary.

“Myself and Jack (McCaffrey) were in the shower and having lost the game it was ‘let this hurt drive us on and hopefully we won’t be in this situation again’. Dessie was a massive role model for us.”

He has long been interested in the top role with Dublin but had to wait in line behind his exact contemporaries Pat Gilroy and Jim Gavin - all three were born within more or less four months of each other.

Yet he appeared to rule out taking on the seniors just after he had led the county to the last under-21 title before it re-graded to under-20, saying after the 2017 defeat of Galway:

“I don’t think so. My roots have been in the development squad stuff and through to minor and the natural evolution was to take on the 21s. The senior is a whole different ball game. The time commitment that’s required at that level - like this is ridiculous but at senior level it’s gone to a whole new level.”

This was however perceived in retrospect to be a slightly disappointed reaction to the imminent news that Gavin was a week later to take up a two-year extension.

He brings something different to the role when compared to his predecessors and that is a track record of having to handle adversity. After losing a minor final, he went through the disappointments of Dublin’s early 1990s, including All-Ireland defeat in 1992 by his mother’s county Donegal - Farrell is a cousin of Ireland soccer international, Everton’s Séamus Coleman.

More recently he has managed his own club Na Fianna, with whom he played in the 2000 All-Ireland club final, losing to Crossmaglen Rangers.

He has also kept his hand in elite preparation with the Dublin hurlers on the invitation of manager Mattie Kenny and the county’s All Star nominee Eoghan O’Donnell spoke highly of the involvement last spring.

“He’s great to have in and he has looked at culture and is there in an advisory capacity to talk to lads. He’s instilled a belief among us that we are one of the teams that can compete.”

Although Dublin were surprisingly defeated by Laois in July’s All-Ireland preliminary quarter-final, they had also eliminated 2018 champions Galway from the Leinster championship.

Farrell now faces into his biggest challenge, steering a course between the dismissal of success because of the resources at his disposal and the disapproval of failure in all of its unfamiliarity within the county.

In some ways taking charge of a team, who have won the last five All-Irelands looks inviting but there are issues. Will Stephen Cluxton stay on to lend his experience to the new management team?

How easy will it be to take over a dressingroom after seven years of Jim Gavin’s leadership and the six All-Irelands that came with it?

Ultimately though it’s his turn because he has earned it.

1 Who is Caelan Doris? Meet Ireland’s newest rugby star
2 Winds of change as Ireland name a refreshed team, picked on form
3 Gordon D’Arcy: If Farrell can tap into our self-worth, we’re all on a winner
4 Clongowes calmly restore order after Terenure’s terrific start
5 Dave Hannigan: Everyone believed they were on first name terms with Kobe Bryant
Real news has value SUBSCRIBE

John Prenty: Cost of intercounty preparations a ‘runaway train’ 21:47
Kerr and Quinn to launch policy document on funding of Irish football 21:42
Mary Immaculate bring that little bit extra to edge out UL 21:19
Dave Hannigan: Everyone believed they were on first name terms with Kobe Bryant 21:00
Holders UCC see off UCD to book spot in Fitzgibbon Cup semi-finals 20:38
Crossword Get access to over 6,000 interactive crosswords