Something cringey about recent evidence of unbearable ‘Corkness’ of Cork 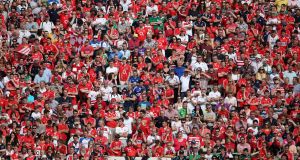 Cork supporters in big numbers at a Munster hurling final. Given the lack of success in recent times, instead of bulling on about ‘Corkness’ it might be time for a little humility instead. Photograph: Cathal Noonan/Inpho

Those of us fortunate enough to be from Cork aren’t culturally renowned for our modesty. That sentence alone is proof.

But by any standard of Rebel self-regard there’s something more than a little cringey about recent evidence of the unbearable ‘Corkness’ of Cork.

That phrase ‘Corkness’ cropped up in the GAA county board’s strategic Five Year Plan for Gaelic Football. It’s a document drawn up by some well-known names including ex-managers Conor Counihan and Brian Cuthbert.

The ultimate aim is to have Cork winning All-Irelands again. Crucial to that, apparently, is the restoration of that magic ingredient of ‘Corkness’ to both supporters and footballers who in recent years have been notable more for diffidence than confidence.

The county board chairperson Tracey Kennedy even helpfully provided a definition of this wonderful red elixir.

‘Corkness’ she described as being “that air of confidence just on the right side of arrogance – an unparalleled pride, and our insatiable desire for Cork to be the best at absolutely everything.”

It was declared, apparently, with a straight face. Presumably so too was Cuthbert’s declaration that ‘Corkness’ is Cork’s greatest strength, what makes the place unique, and the people different from anyone else.

All this provoked quite a lot of punditry about ‘Corkness’ in general. A lot of it mused on the singularity that supposedly comes from residing within the county bounds but which recently has mysteriously failed to percolate into those playing in the red jersey.

To which most anyone anywhere with any kind of functional self-awareness is entitled to respond with – what? As in WHAAAAT?!

What towering pile of self-aggrandising baloney is this that gets to be delivered with a straight face?

We’re only just into February but surely no more ludicrous pat of steaming bullshit will get dropped into sporting discourse in 2019. Not only that but it’s pressed between two covers and reeks of the presumption that it should be taken very seriously indeed.

The thing is this whole cocky Cork thing isn’t really serious. That famed bounce is just a piece of shtick.

It’s hard sometimes not to wind up playing up to the caricature, like encountering someone from a midland bog-hole and teasing them on missing out on the wonders of Reenascreena. Come on, it can’t be anything but a giggle. Except now the punch-line is policy. So who’s laughing now?

Well obviously anyone anywhere with a working sense of humour is entitled to burst a gut. It’s impossible to picture this sort of naff guff being pedalled into policy by sporting organisations anywhere else in the country. Or that they’d want to play up to such stereotypes in the first place.

Tyrone don’t prattle on about ‘Tyroneness’. The county board there doesn’t preen itself in fanciful reflections of chippy trash-talking Gaeilgeoiri hammering the heads of each other. Leinster rugby doesn’t boast about the number of BMW x5’s per capita it pulls to the RDS.

Cartoon ‘Corkness’ would probably say that’s because they haven’t much to be boasting about – because they’re not from Cork. Except little or no Freudian analysis is required to realise such a determined superiority complex must ultimately be rooted in insecurity.

Real confidence doesn’t require aggressive blow-holing, and certainly doesn’t come with an official stamp of county board approval. Can anyone imagine those at the helm in Kilkenny coming out with this sort of bloated self-regard: it would have Brian Cody spitting in his hands.

Okay, that’s a bit stereotypical too but such clichés abound here. Everyone recognises flaky Tipp, mean Cavan or referee-worrying Wicklow. The GAA’s capacity to define people’s sense of identity is unrivalled in Irish sport. But no one’s ever tagged a ‘ness’ onto one before and so blatantly meant it.

No doubt there are some who will see this as part of a broader ‘Corkness,’ maybe even point out how it chimes with other contradictions, such as how the self-proclaimed Rebel County can be notably conservative and a spiritual home to tuppence ha’penny looking down on tuppence.

But even the most obtuse can surely see that flirting with arrogance requires actual accomplishment if such posturing isn’t to be dismissed as ridiculous shaping.

Cork football and hurling would do well to concentrate on that rather than rubbing itself in the buttery self-regard of this ‘Corkness’ malarkey.

After all, for all the negativity Cork footballers get, it’s worth recalling that they were the county’s last All-Ireland winners in 2010. That team had their resolve repeatedly questioned during a long period of contention at the top level. But at least they did eventually fall over the line against Down.

In contrast, the hurlers that get clamped enthusiastically to rebel bosoms haven’t won since 2005. Last year they somehow managed to blow a six-point lead with nine minutes to go in the semi-final against Limerick. There isn’t much call for haughtiness on the back of that sort of cave in.

There’s always a chicken and egg element to whether or not tradition or success comes first in the GAA. The reality is Cork has all the tradition but little success. So instead of bulling on about ‘Corkness’ it might be time for a little humility instead.

‘Corkness’ isn’t going to beat that. All banging on about it does is highlight the dangers of swallowing your own baloney and a failure to realise how ridiculous it sounds. Real confidence is quiet. It doesn’t need grandiose projection.

Failure to appreciate that might actually be real ‘Corkness’ as is failure to recognise how Cork football’s real problem is almost always all that ‘Kerryness’ next door.