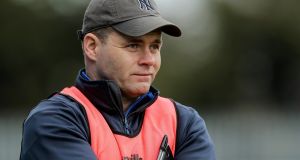 Dublin have appointed Dessie Farrell as manager of the county footballers. He succeeds Jim Gavin, who stepped down after leading the county to an historic five All-Irelands in succession.

The appointment was announced at a packed Parnell Park where delegates had gathered for the 2019 county annual convention.

The county board issued a statement confirming the news.

“The Dublin GAA county committee is delighted to confirm Dessie Farrell as the new manager of the Dublin senior football team for a three-year term.”

Outgoing County Board chairman Seán Shanley said: “Dessie has played an integral role in the success of the Dublin footballers over the past decade in his time as manager of the Dublin minor and Under-21 teams. We wish Dessie the very best and look forward to the 2020 season.

“The makeup of Dessie’s management team will be announced in due course. “

The 48-year old from the Na Fianna club in Glasnevin had been one of the two favoured candidates once the vacancy occurred two weeks ago but with the unavailability of former manager Pat Gilroy, Farrell was assumed to be in pole position.

The fact that the decision took so long suggested that a certain complication had arisen and when it emerged last weekend that Gavin’s assistant Declan Darcy was being sounded out on the possibility of continuing it was clear that a hard choice might have to be made between continuity and a new departure.

Gavin’s long-term lieutenant had originally been thought not to have the time to continue with his involvement in the county team, a belief that hardened when Gavin stepped down two weeks ago.

That the four-man sub-committee opted for Farrell is recognition of his strong credentials, as manager of the All-Ireland winning minors of 2012 and the under-21s of 2014 and ‘17.

It is also a reflection of the fact that he has worked with so many of the current senior panel between county development squads, minor and under-21 teams.

He steps up to what is a formidable challenge, succeeding the most successful football manager in Dublin’s history, the county having won six of the last seven All-Irelands.

His first match comes on the second weekend in January when Dublin play in the O’Byrne Cup semi-finals.

The weeks ahead are busy with the team holiday taking place later this month and in just seven weeks the All-Ireland champions will face Kerry at Croke Park in the first fixture of the 2020 AFL - a re-run of last September’s replayed All-Ireland final.

There will be considerable interest in his back-room team when he gets around to announcing it - as there will be in the intentions of team captain Stephen Cluxton, one of just a handful of players not to have been coached by Farrell although they were team-mates in the early 2000s.

If there is to be continuity with Gavin’s management, forwards coach Jason Sherlock is a former Na Fianna club-mate, as is another former All-Ireland medallist Mick Galvin.

Galvin was an Under-21 selector with Farrell, as were Alan McNally and Philip McElwee.

Dublin begin the defence of their championship titles next May against Westmeath.

Five soccer books to get your teeth into this month 06:00
How much do hotel prices rise for major sports events? 06:00
Crowds and viewing figures get Allianz League off to hot start 06:00
Gerry Thornley: Temple Carrig are the true schools rugby story of the season 06:00
In mourning Kobe Bryant mourn the bad as well as the good 05:30
Crossword Get access to over 6,000 interactive crosswords