The Backdoor: Are Dublin prone to a decline in September? 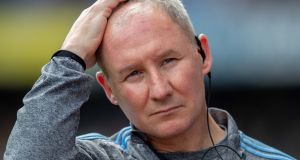 For all Dublin’s success on the All-Ireland final stage one trend stands out. For Kerry it provides a source of hope.

After going further than was expected of them Kerry are widely believed to have missed their chance. Dublin underperformed. They were there for the taking and Kerry just managed a draw. Now, Dublin are wounded animals and, as a result, that can only spell trouble for the Kingdom, a county still looking for their first championship win over a Jim Gavin side. But the trend remains, jutting out like a glowing buoy in the sea, offering the faintest smidgen of hope.

Despite aiming for the historic five-in-a-row Dublin appear to be failing to hit the heights expected of them in September. Yes, they get over the line but, notwithstanding 2018, they don’t cruise to the title as comfortably as expected. Why?

Have we been overestimating the final performances of Kerry and Mayo? Are Dublin prone to a decline in September? The 2015 decider, for example, was far from a classic, a kick of a ball separating Kerry and Dublin. A year later Mayo forced Dublin to a replay before losing by a point, as was the case 12 months later. For a championship with one side considered to be well ahead of the chasing peloton All-Ireland finals are usually much tighter affairs than anticipated.

So to suggest Kerry have missed the boat ignores the evidence recent finals have to offer. For some perverse reason the gap between Dublin and the rest narrows at this time of the year and putting that down to the performances of Kerry and Mayo may be misplaced praise for the latter.

Perhaps this is Dublin’s bullish style of doing things, but Kerry need every source of hope they can muster.

Galway won the All-Ireland senior camogie championship for only the third time yesterday. They had previously lost the decider on 15 occasions.

Rest assured, the rejigging has begun.

On Dublin’s bench the options are obvious: Cian O’Sullivan can slot into that sweeping role, Cormac Costello could start and rediscover his early season spark, the experience of Bernard Brogan, Kevin McManamon et al adds that peerless intuition.

But what cards have Kerry left to play?

It’s true Peter Keane may have utilised most options by now, but there is one option that has yet to be called upon in this tie – the forgotten man, and the only former Footballer of the Year in Kerry’s squad.

James O’Donoghue hasn’t been seen since his side’s drubbing of Mayo in Killarney, and while his season has hardly been a stellar one – he’s scored 1-2 across two outings – he can still bring another dimension to Kerry provided he overcomes any lingering fitness doubts.

With Dublin set to strengthen their arsenal this weekend Kerry need to dig deep into the weapon chest if they’re to match their opponents, not to mention outwit them; and the Killarney Legion man may just be the answer the Munster men seek.

September is no stranger to tales of redemption; this year could see the Killarney Legion man write his.

“I don’t have one style of play . . .Teams that are challenging at the highest level can adapt and play different styles.” – Despite developing a reputation as a defensive-minded manager, new Derry manager Rory Gallagher told BBC Sport there is more to his management style than an ultra-defensive mindset.

In another lifetime Tolstoy could easily have used his quill in another capacity, perhaps moonlighting on county board committees where his words would carry no lack of apt advice.

The curtain has yet to fall on 2019 and already counties are sowing next year’s seeds.

The carping about championship structures and fixtures calendars has been sidelined for now with all energies directed towards another year in search of glory.

There’s no time to change the world when there are managers to be appointed.

Interestingly, a number of counties are opting for the tried-and-trusted method, a trend that has seen the likes of Allardyce and Hodgson and Bruce employed for years in a different code.

And Niall Carew and Kieran Kingston could, too, be back in that sphere soon.

But there will be a nice sprinkling of new faces on next year’s managerial roster, Paul Galvin and Ryan McMenamin just two to take the plunge with more likely to follow in the coming weeks. New and old ideas already contributing to a fascinating new season.