Kevin Walsh departs with Galway certainly in a better place 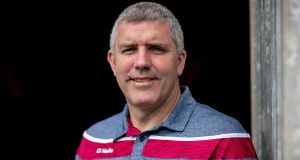 Kevin Walsh has stepped down as Galway manager. Photograph: Inpho

Galway are in the market for a new senior football manager after Kevin Walsh stepped down on Tuesday.

The former All-Ireland winning midfielder has been at the helm for the past five years. In that time Galway have returned to Division One of the league for the first time since 2011. They won the 2017 Division Two title and in their first season back in the top tier they reached the league final.

Under his tenure Galway have played in five Connacht finals, all against Roscommon, winning two and drawing one. They have beaten rivals Mayo in three of the last four Connacht championships - before that Mayo had won five titles in a row and beaten Galway in their previous five championship meetings.

Last summer Galway reached the All-Ireland semi-finals, beaten by eventual winners Dublin. But this year they followed up on a sluggish league campaign by exiting the championship in the qualifiers - beaten 2-13 to 1-13 by Mayo in the fourth round.

Walsh’s squad had to play without their Corofin contingent for much of the league and were hit by multiple injuries that carried into the summer - most notably to star forward Damien Comer. Nevertheless, the team came in for heavy criticism for their defensive style of play, once the results began to turn.

On Tuesday, Galway GAA acknowledged “Kevin’s tremendous dedication and contribution to Galway football, and his achievements over the past five years. Galway, under Kevin’s management, achieved promotion to Division One and consolidated our position there.

“Galway GAA would like to acknowledge the professional structures Kevin put in place and Galway GAA were happy to support Kevin achieve these goals, and provide the necessary resources, and Galway GAA will continue to do this.

“Galway GAA have been engaged in the review process with Kevin, over the past week, and following consideration, and Kevin has decided not to continue as Galway senior football manager.”

Galway club side Corofin have won three of the last five All-Ireland club titles, with former Mayo manager Stephen Rochford in charge for the first of those.

The county have also won All-Ireland titles at Under-21 level in 2011 an 2013 as well as losing the 2017 decider. Midfielder Paul Conroy was part of the 2007 All-Ireland winning minor team, while the county have reached (and lost) three of the last four national deciders at that grade. The vacant position will be an attractive one.

Walsh said in a statement released via the county board that “when we took over in 2015, we sought to introduce structures to achieve the two core objectives of making Galway football more competitive and leaving Galway football in a better position. Over 25 players have made their senior championship debuts for Galway since then, and the commitment of the players over the years, has been one of the key factors in achieving those objectives. We would like to thank them for their dedication and friendship.

“We wish to acknowledge the substantial contribution of the backroom team, in putting in place, the systems and processes, that have been the foundation of what was built over the past few years.”

He also thanked “the genuine Galway football supporters. Your passion for the maroon and white never went unnoticed. I am honoured to have been given my chance to leave Galway football in a better place and I wish the players and new management team every success in the future.”

Before his arrival Galway had gone seven years without a provincial title, equalling their longest drought since 1954. There’s no doubt they are in a better place.