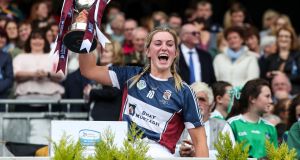 Pamela Greville shot nine points, three of them from play, while Laura Doherty and Amy Scally led an astounding second-half defensive effort that kept Galway to one injury-time point, as Westmeath over turned a seven-point interval deficit to annex the All-Ireland Intermediate Camogie Championship.

The Lakesiders secured senior status for the first time in their history just two years after winning the Premier Junior decider and it was 36-year-old Greville who was at the core of their outstanding achievement.

She was well supported in attack by the industrious Megan Dowdall and team captain Mairéad McCormack, whose 41st minute goal swung the tie in her side’s direction.

The game got off to a dramatic start as referee Andrew Larkin had no option but to award a penalty to Galway, after Mairéad Dillon was fouled, but Rachel Monaghan’s shot was at a nice height for Méadhbh Scally, who made the save.

Niamh Horan and the sublime Greville pointed at the other end, the latter’s score illustrating the advantage of HawkEye once more, after Galway goalie Laura Glynn had batted the shot away but the sliotar had cleared the crossbar.

Westmeath should have been further ahead though and were punished for their wastefulness as Galway hit a goal and six points without reply to apparently put themselves in a very strong position for glory.

Monaghan (free) and Karen Kennedy slotted points before Ava Lynskey sent a bullet to the Westmeath net in the 20th minute.

Mairéad Dillon capitalised on a slip by Scally to gather possession and she fed the overlapping Lynskey, who gave Fiona Keating no chance with a rasper from the left side of the square to the far corner.

Monaghan supplemented that major with two fine points from play and the margin was seven points.

Two points each left it 1-8 to 0-4 at half-time and it was hard to see anything other than a Galway success.

That was to reckon without the fighting spirit of the Westmeath troops and the leadership qualities of Greville in particular, and the remarkable workrate of the entire team.

Greville had a ground shot saved by Glynn straight after the resumption but drove over the 45 and followed up with two frees.

The key score was the 41st minute goal by MCormack, the Castletown Geoghegan attacker rising high to fetch a delivery to the edge of the small parallelogram and after being hooked brilliantly by Louise Brennan, sliding a ground shot from the angle to the net.

Galway were reeling and Greville was unstoppable, hitting three of the next four points, though Dowdall and Sheila McGrath played a major role in this period.

Galway finally got off the mark for the second half with a point from a free in the fourth minute of injury time by substitute Niamh Horan, who sent her shot from 25m whistling over but it was too little too late.