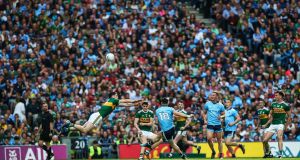 Dublin’s Diarmuid Connolly shoots wide late on against Kerry. Sunday’s was the first of seven finals under Jim Gavin that no Dublin substitute scored in. Photograph: James Crombie/Inpho

When Jim Gavin has required inspiration over the years, he has typically only needed to look over his shoulder to his star-studded Dublin bench.

In his first 45 Championship games as manager, a period stretching from 2013 to last month against Tyrone – his bench returned at least a score for him on every occasion bar one, against Fermanagh in 2015.

Those substitutions have routinely paid off in spades for Dublin in huge games, the fresh legs and appetite for destruction of players such as Kevin McManamon in 2013 against Kerry and Cormac Costello in 2016 against Mayo securing memorable wins.

Yet in matches 46 and 47 under Gavin, last month’s All-Ireland semi-final win over Mayo and Sunday’s draw with Kerry, not a solitary score has come from the bench.

Sunday’s was also the first of seven finals under Gavin that no Dublin substitute scored in and that will be an area that the management go after for improvement ahead of Saturday week’s replay.

Gavin has always placed a huge emphasis on his subs making an impact. One of his earliest soundbites as Dublin manager was a statement that he’d happily work off squad numbers instead of the traditional one to 15, claiming he viewed both subs and starters as equally important.

It will come as no surprise then that in Gavin’s first 46 games as Dublin manager, he used his full quota of six subs – five before the black card’s introduction in 2014 – all but once.

The exception, for the record, was the 2016 semi-final win over Kerry when he made do with five subs.

Three years later, he broke his own apparent rule again last Sunday by bringing on just five players, declining the option of a sixth. In a game that was crying out for inspiration, Gavin felt it was better to stick with what he had on the pitch for the last nine minutes or so.

His options at that stage were Paddy Andrews, Darren Daly, Philly McMahon, Cian O’Sullivan or Peadar Ó Cofaigh Byrne, the latter an All-Ireland U-20 finalist this year.

It was only in the 68th minute that Gavin actually introduced his third sub, Diarmuid Connolly. Speaking on the Sunday Game, Seán Cavanagh suggested that Gavin looked slow to make changes and queried whether he had trust in McMahon and O’Sullivan to improve the situation.

That question of exactly how much Gavin trusts his bench has already been raised, of course, by the decision to parachute Connolly back into the panel mid-summer.

“I actually feel that Jim Gavin has more homework to do over the next two weeks than Kerry do,” said Cavanagh.

It’s a fair point and the drawn final has thrown up a potential lifeline for Bernard Brogan as well as Rory O’Carroll, Eoghan O’Gara and the other household names that didn’t make the 26 last weekend.

It had seemed certain that Brogan would retire on the back of not making last weekend’s squad but given Dublin’s lack of punch from the bench in recent games, it would be no surprise to see him figure in the replay.

It remains to be seen if Gavin goes so far as to drop any of his first-team players.

Brian Fenton still hasn’t lost a Championship game for Dublin but delivered one of his most anonymous displays in a blue shirt against Kerry.

He didn’t touch the ball until the seventh minute and after completing a hand-pass to Jack McCaffrey in the 67th minute only felt the weight of the leather once more in the remaining dozen or so minutes.

In total, Fenton had just 17 possessions – down 12 on the 29 he had against Mayo – with 11 of those ending with a completed hand-pass around the middle third of the field. Fenton also had five completed kick passes and one kick-pass that went astray as he concluded the game shadowing David Moran.

Wing-back John Small wasn’t as influential as normal either, getting on the ball a mere 11 times, shooting a wide and picking up a booking before leaving the field as a blood substitution that was made permanent.

Like Small, Paul Mannion only had 11 possessions as well and while he did score two points, in the first and 16th minutes, it was an afternoon of unfulfilled potential.

Jonny Cooper arguably drew the short straw being pitched in against David Clifford but even allowing for the scale of that challenge, the defender’s numbers will frustrate him; just seven possessions, five completed hand-passes, a kick-pass and possession spilled on another occasion. Throw in the concession of a penalty, two yellow cards and a red card and you have a nightmare final.

McMahon or O’Sullivan would have been obvious alternatives in the past though if Gavin didn’t call upon them at any stage last Sunday, will he do so from the start for the replay? Fenton is surely on safer ground as perhaps the team’s most important player with Mannion unlikely to be dropped either.