Andreescu focused on US Open final after ‘crazy’ year 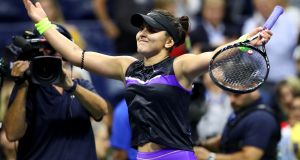 Bianca Andreescu of Canada after winning her Women’s Singles semi-final match against Belinda Bencic of Switzerland in the US Open at the Arthur Ashe stadium in New York on Friday. Photograph: Clive Brunskill/Getty Images

Bianca Andreescu reflected on a “crazy” year as she prepared to face Serena Williams in the US Open final.

Just 12 months ago Andreescu lost in the first round of qualifying at Flushing Meadows and was ranked 208 in the world.

Even ESPN pundit Pam Shriver admitted “I don’t think I’d heard of you” as she greeted the 19-year-old on court following her semi-final win over Belinda Bencic.

But Andreescu, still ranked a lowly 152 at the start of the year, has now joined Shriver and Venus Williams as the only women to make the final on their main draw debut.

“Had someone told me last year that I’d be in this final I don’t think I would have believed them,” said the Canadian, seeded 15th.

“In fact, if someone would have said that a couple weeks ago, I think I would have believed them.

I fought really hard to get to this point, so I really think I deserve to be in the finals on Saturday

“I’m really looking forward to it. She’s an amazing champion on and off the court. It’s going to be fun.

“I’ve always dreamt of this moment ever since I was a little kid. But I don’t think many people would have actually thought that it would become a reality.

“I fought really hard to get to this point, so I really think I deserve to be in the finals on Saturday.

“I watched her win most of her grand slam titles. She’s fighting for her 24th on Saturday. I’m sure she’s going to bring her ‘A’ game.

“I’m going to try to bring my ‘A’ game, too. Hopefully, I guess, may the best player win.”

Yet Williams maintains the milestone is not her motivation. “I’d definitely still be playing even if I had already passed it,” she said.

“I’ve had so many chances to pass it, but it’s cool because I’m playing in an era, or five eras, with so many amazing players.

“If you look at the span of the career, the players I’ve played, it’s amazing that I was able to get this many.”