Has spontaneity been coached out of Dublin forwards? 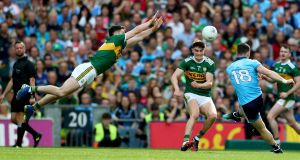 Late in the All-Ireland football final Dublin fans were treated with a sight that looked like a throwback. Perched just outside Kerry’s 45m line and dead straight in front of the posts, Diarmuid Connolly took a pass and didn’t hesitate. Few players have such a languid and effortless striking style as the St Vincent’s man. The connection was clear.

The distance is comfortably within Connolly’s range. He habitually knocks over points from that distance when warming up. It wasn’t until the football was sailing past the posts that those in the stadium realised it was wide. Afterwards the play was presented as evidence Dublin were out of ideas at that time. In fact it was redolent of how they used to play the game before embarking on this five-season run where no team has beaten them.

Specifically it contained an echo of the day in 2014 when Dublin peppered the Donegal posts with a series of bravura scores from outside the 45m line. Connolly, Philly McMahon and Paul Flynn shot with impunity and accuracy from distance, leaving the compact Donegal defence unable to do anything about it. Having established an early lead through those long-range scores they then went for the kill by creating two goal chances.

Everyone knows what happened next: up 0-9 to 0-4 they left the door open. Donegal survived that torrid opening period and then tore the All-Ireland champions apart. The long-range shooting which had looked so imperious in the opening stanza of the game looked frantic and desperate in the last quarter. Never again would Dublin be so cavalier in their attack.

Connolly’s shot was a startling reminder of just how radically Dublin’s attacking play has changed over the course of those five years. Against Donegal that day their starting six was: Paul Flynn, Cormac Costello (who replaced Kevin McManamon, named on the programme), Diarmuid Connolly, Alan Brogan, Eoghan O’Gara and Bernard Brogan. The bench was stacked with a series of names who would gradually become key figures over the coming years: Jack McCaffrey, Dean Rock and Paul Mannion.

Five players who started that 2014 game also started last Sunday’s All-Ireland final: Stephen Cluxton, Michael Fitzsimons, Jonny Cooper, James McCarthy and Michael Darragh Macauley. Of that group Cooper is the only one who didn’t start the 2011 All-Ireland final. That senior gang has a lot of mileage, and as Sunday’s drawn final illustrated the team is more reliant on their influence now than ever before.

Cluxton’s performance was the talk of the town. Fitzsimons was Dublin’s most assured defender. McCarthy remains the most important outfield player on the team. And it was obvious the Dublin management they didn’t have the option of calling MDMA ashore: he played for a whopping 77 minutes.

Two years ago, when Dublin beat Mayo in the All-Ireland final, Jim Gavin had the luxury of sending in Paul Flynn for McCaffrey, who had torn his ACL after just nine minutes.

Connolly, Kevin McManamon, Bernard Brogan, Costello and Ciaran Kilkenny would follow. It was devastating proof of Dublin’s depth: six attacking players including a former footballer of the year (Brogan), a future football of the year (McCaffrey 2015), a four-time All-Star (Flynn) and one of the game’s maverick geniuses. But now Flynn has retired, and Brogan was omitted from the match day panel on Sunday. Dublin’s bench is still strong but nothing like as deep as it was then.

When McCaffrey decided to spend a year working abroad in 2016, the general line was how comfortably Dublin survived without him. But they would have been lost without him against Kerry. His 1-3 from play originated from his fearless attacking opportunism but the Kerry management will regard it as a major slip-up on their part that they hadn’t laid out a more detailed plan to keep eyes on him.

Take McCaffrey’s total and Rock’s placed-ball contribution of 0-7 out of the equation and Dublin’s starting and replacement forwards managed 0-6 from play over the 77 minutes of the All-Ireland final. Pardon the excellent Rock from that accusatory stat and the rest have 0-3. In addition, Dublin’s attack finished with 0-1 from play over the course of the second half.

These are alarming figures for a team whose omnipotent reputation is built on their fearsome attacking power. The 2-6 in 12 minutes with which they buried Mayo’s All-Ireland hopes is evidence that this not a myth: they are capable of really hurting teams. But their struggling 0-2 from play over the first 35 minutes of that game – Brian Howard’s point arrived during injury time – presents an equal proof of their capacity for drifting through long spells where they are scoping and assessing the opposition rather than just blitzing them with scores.

Brian Fenton is Dublin’s third highest scorer in the championship, behind resident place kickers Costello and Rock. Break down the frightening 5-18 they posted against Cork in the Super-8s game you see that 3-4 came from either midfielders or defenders.

That contribution is in keeping with the theme that Dublin have evolved into the complete football unit: that the scores can come from anyone and anywhere.

Or rather anywhere within the high-percentage scoring zone which has become Dublin’s preferred shooting range. When you think of players like Flynn and Brogan and Connolly in their pomp, you think of play-anywhere scorers, with Brogan, in particular, a nightmare goal-poacher from close range because of his timing and willingness to lurk on the edge of the small square until his man was forced to commit himself to cover the approaching danger.

By the 2015 final Rock and Kilkenny had been elevated to the starting forward unit but and it wasn’t until 2017 that the new wave of Dublin forwards had begun to shape the attack, with Con O’Callaghan and Paul Mannion both starting. O’Callaghan arrived in a starburst, hitting 0-12 (including frees) in his first Leinster final, shocking Tyrone with an early goal in the semi-final and then taking just over a minute to hit Mayo with a goal in their 1-17 winning score. Funnily, it was his only score of the day. It would become a feature of O’Callaghan’s play: capable of destroying teams but also liable to go through quiet games.

Mannion remains the closest in spirit to the more cavalier approach to points taking, as illustrated by his audacious range of distance scoring in the All-Ireland semi-final blitz against Mayo. It was noted after that 2017 season that Kilkenny’s rate of scores had dropped significantly. For the 2018 season he operated more as a full forward and finished with 2-24 rather than 1-9 in the previous campaign.

Positioning him at full forward for the Kerry replay remains an option but the sight of Kilkenny operating as a kind of point guard for Dublin has come to look like a natural fit. He didn’t score against Mayo but his fingerprints were all over the 10-minute scoring blitz which won them the game. He didn’t score against Kerry either and didn’t even shoot a wide.

Dublin want different things from their forwards now: Howard had a phenomenal game in the drawn match but he didn’t attack with anything like the same frequency as McCaffrey or even John Small.

Dublin’s collective strengths saw them coast to the All-Ireland final. They looked brilliantly coached – hugely athletic and conditioned, limitlessly patient and selfless and sooner or later the front-up pressure they exerted on teams told and the opposition cracked.

On Sunday that didn’t happen partly because Kerry didn’t crack and partly because Dublin were too pre-occupied with what Kerry were capable of when running at them. It’s true they played with 14 men in the second half. But when Dublin go through their analysis they’ll be wise to concede they were blessed not to cough up three goals with 15 men on the field.

The All-Ireland champions will remain favourites to retain the All-Ireland on Saturday evening. One of the main pre-match themes will revolve around an anticipated response from the Dublin forward unit. It may well come, but what the final revealed was an uncomfortable suspicion the spontaneity and adventure may well have been coached out of the city team; qualities which remain second nature to Kerry and which may just give them an unquantifiable edge when they do it all again this Saturday evening.

Andrew Porter ready to lay down a marker at Thomond Park 06:00
Joanne O'Riordan: Why I want to live a bit more like Ted Lasso 06:00
Garry Ringrose and Béibhinn Parsons honoured by Rugby Writers 06:00
Aisling McCarthy looking to develop on and off the pitch in Perth 06:00
Rugby Stats: Ruddock and Coombes tick all the boxes for Ireland squad inclusion 06:00
Crossword Get access to over 6,000 interactive crosswords