Relations between Mayo GAA Foundation and county board had become "strained" 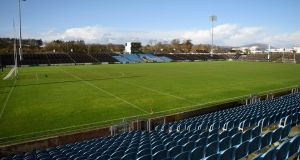 Mayo are still repaying a sizeable debt due to the redevelopment work at MacHale Park. Photograph: Dave Farrell/Inpho

Efforts are being made to resolve a potentially very damaging impasse, affecting Mayo GAA.

It has emerged in recent days that a stand-off has developed between the county board and the Mayo GAA Foundation, the fund-raising body which organised last May’s black-tie dinner event in New York.

In a message on social media last week, the foundation announced “with great regret that due to a breakdown in relations our foundation can no longer work with @gaamayo_official in their current structure”.

It held its big fund-raising dinner in New York in May at a time of high enthusiasm for the Mayo team, which had just won this year’s Allianz Football League and faced New York in the Connacht championship on the same weekend as the event.

At the dinner county chair Mike Connelly described O’Leary as “one of the greatest Mayo supporters”.

More recent relations between the foundation and the county board were described as “strained” by one source in the county. Earlier this week, O’Leary told the Mayo News he had become “frustrated” with the “unprofessional” way the county board conducted its business.

Mayo GAA has declined to make any comment on the situation in the hope that problems can be resolved.

The foundation retains a significant six-figure sum as a result of its activities – according to last week’s social media post, around €200,000 – and has already spent nearly double that amount this year.

The post also stated that the foundation would donate 12 O’Neill’s footballs to every club in the county and make a cash donation to hurling clubs. Furthermore, Mayo Mban, the supporters club for the county women’s football team, have thanked the foundation and O’Leary for €10,000 committed to them.

One of the key points of friction is believed to be the undefined nature of the relationship between the county board and the foundation. It is common for supporters’ groups to look for more autonomy in distributing the funds they raise whereas GAA administrators believe that this should happen through official channels.

According to one source with experience of working to raise funds for Mayo, this can create difficulties.

“The county board need funds and want fund-raisers to do the work but still want total control. One of the big stumbling blocks is that donors involved with certain fund-raising groups and events want funds to be ring-fenced for county teams’ efforts and expenses but the county board prefer to mix it all into one pot and use it as they see fit.”

The board allowed a loose relationship with the foundation to go unregulated, according to one observer.

“There needed to be a bit more ‘terms and conditions’ around the whole process of raising money that was to be distributed. It was raised on the assumption that it would be going to the senior team or projects within Mayo GAA, like a training centre or underage structures.”

Mayo have spent over €1 million on the senior team in recent years, helped by fund raising in London and Ireland by Cairde Maigh Eo, the official fund raising organisation for the county. The hope was that this success could be replicated in the US and the revenue streams combined.

The county is also repaying a sizeable debt incurred by redevelopment work in MacHale Park. This debt was taken over by Croke Park consolidated on improved terms but still costs around €€30,000 per month.