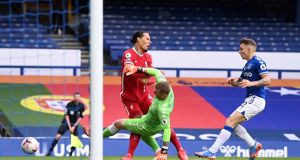 Liverpool have been dealt a devastating blow after scans revealed Virgil van Dijk damaged an anterior cruciate ligament against Everton and requires surgery.

No timeframe has been put on the influential defender’s absence and Liverpool sources are reluctant to rule out a return this season, but he is facing several months on the sidelines and the possibility of missing the remainder of the campaign cannot be discounted. The extent of the lay-off will be known only once surgery and a subsequent assessment have taken place and the operation has not yet been arranged.

Van Dijk was injured early in Saturday’s Merseyside derby by an appalling foul from the England goalkeeper Jordan Pickford, who escaped punishment from the referee, Michael Oliver, or the VAR official, David Coote.

Van Dijk was taken to hospital after the game for a scan and visited a consultant on Sunday when Liverpool’s worst fears were confirmed.

“Following surgery, Van Dijk will begin a rehabilitation programme with the club’s medical team to enable him to reach full fitness as soon as possible,” a club statement said.

Jürgen Klopp was incandescent after the 2-2 draw, both with VAR’s failure to review the Pickford incident and its decision to disallow Jordan Henderson’s 92nd-minute goal owing to a fractional offside against Sadio Mané. Losing Van Dijk for the majority of his team’s title defence, however, represents a far greater setback that has implications for Liverpool’s chances of retaining the Premier League and in the Champions League.

The Netherlands captain has been a transformative signing for Liverpool since his £75m arrival from Southampton in January 2018 and almost ever-present in the team’s rise to Premier League champions and Champions League winners under Klopp. The defender had played every minute of Liverpool’s previous 74 league games prior to Saturday. He had not missed a minute of Premier League football since damaging a rib against Southampton on 22 September 2018.

“Virg played I don’t know how many games in a row,” Klopp said on Saturday. “He plays with pain but he couldn’t play on and that’s not good.” Van Dijk’s injury, coupled with the departure of Dejan Lovren in the transfer window, leaves Klopp with only two established central defenders until January in Joël Matip and Joe Gomez, neither of whom has a strong fitness record. Defensive midfielder Fabinho has been deployed in central defence on several occasions.

Thiago Alcântara also had scans on a knee injury suffered in the derby following a dangerous foul by Richarlison. The injury needs to settle before the full extent of the problem is known but Liverpool are hopeful the midfielder’s injury is not serious. The Everton forward, who was shown a straight red card by Oliver, messaged an apology to Thiago on Saturday.

Liverpool have asked the Premier League to review VAR’s usage in the derby and want an explanation as to why Pickford’s challenge was not scrutinised, which part of Mané’s body was deemed to be offside and the moment VAR decided to freeze the frame.

The club believes there should be more transparency around how VAR reached its conclusions and is concerned at what it considers to be confused and conflicting explanations offered so far. Liverpool may also ask the PGMOL for clarification on VAR’s application at Goodison Park. - Guardian