TV View: Golfers – and cows – get on with it while tennis stars get hot and bothered 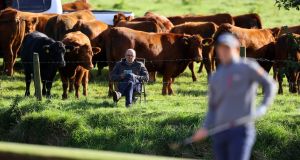 Having just come through the coldest September night in Ballymena in 110 years, you’d imagine that Billy O’Kane’s cattle wouldn’t have had much sympathy for Victoria Azarenka.

While they’d had to endure temperatures of minus-four degrees, it was, by comparison, a balmy eight degrees over in Paris where, lest we weren’t discombobulated enough, the French Open was beginning. Which means our bodies will be telling us that we should be eating strawberries and cream and watching Wimbledon in about a month.

Billy’s cattle were, of course, the stars of the Irish Open, gathering, as they did, around the farmer in his deck chair in the field beside the 14th green to monitor the putting, the man with the greatest name in the history of sport, Maverick Antcliff, clearly impressing them most.

Wayne Riley had a chat with Billy and the cattle come Sunday, noting with no little alarm that their herd mentality was ruling out social distancing. At which point the world and its mother wondered out loud if they were striving for herd immunity. And then Wayne proceeded to make about 97 more cow puns, Andrew Coltart chipping in by noting that Antcliff had just made “an udderly brilliant putt”. By then the viewers had herd enough.

I think she thought she was walking out into the Arctic Circle, the number of layers she has on her

But it was brassers on the course on Sunday morning after that record-breaking minus-four night, which put Azarenka’s complaints about conditions in Paris in perspective.

“I AM COLD! IT’S EIGHT DEGREES! I LIVE IN FLORIDA! I’M USED TO HOT WEATHER!”

“TRY LIVING IN A FIELD IN BALLYMENA,” Billy’s cattle would no doubt have replied. If they could talk.

Eurosport’s Nick Lester had suspected Azarenka was feeling a bit chilly when she arrived on court for her first-round match with Danka Kovinic, wearing, as she did, both a puffer jacket and an expression that suggested she’d have preferred to have been heading to the dentist for root canal work.

“I think she thought she was walking out into the Arctic Circle, the number of layers she has on her,” said Nick, although, in fairness, he did concede that “the only way you can prepare for a day like today is to spend two weeks in Eastbourne in October”.

But it would be accurate to say that there’s been a distinct lack of enthusiasm for the tournament from quite a few of the players who have actually turned up, the weather being a primary concern as well as the possibility of the clay taking on a Play-Doh like texture and the ball bouncing no more than ankle-high.

As the BBC’s Russell Fuller put it, “Roland Garros feels like a seaside resort out of season”, this almighty effort to squeeze the bulk of the planet’s postponed sporting events into the last few weeks of 2020 not feeling hugely wise.

Mind you, Sam Bennett has no complaints about the Tour de France going ahead after its initial postponement, his Parisian experience in or around 110 per cent happier than Azarenka’s.

As if we weren’t emotional enough about it all, The Late Late Show only went and used the intro to Where the Streets Have No Name over a montage of Sam’s finest Tour moments, culminating in him triumphing in Paris. And then, just to finish us off, they showed us that clip of his Grandda watching Sam on telly back home. “God love him,” said Sam, “I nearly finished him off.” Us too.

The only awkward moment during the interview, Sam beamed in from his Monaco apartment, was when he was asked if he was a Tipperary or Waterford man. This, of course, was an even more incendiary question than asking Rory McIlroy if he’s Irish or British. Sam declared for Tipp, which probably resulted in skirmishes at the border that night.

People oft criticise Donald Trump for his talk about “American exceptionalism”, so you’d be slow enough to start harping on about Irish exceptionalism in terms of us having some of the very loveliest sporty people on earth. True, though.

Sam Bennett, even if he refuses to wash his green jersey, conceding there’s “a bit of a hum off it”, but keeps it anyway in the apartment he shares with his wife, is a dote. So too is Kellie Harrington, who appeared later in the show. You could listen to her forever, she’s a gem – as those she works with in St Vincent’s Psychiatric Hospital in Fairview would attest.

Granted, those few seconds she sparred with Ryan Tubridy left us fearing she’d snap him in half, but he made mention of the two-metre rule and there ended the contest. A wise man.