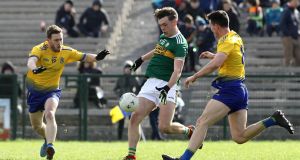 Kerry clinched their place in the Division One league final with a comfortable 10-point win over Roscommon before an attendance of approximately 4,000 supporters at Hyde Park. The defeat consigns Roscommon back to Division Two after just one season in the top flight.

A draw would have been enough to keep the Rossies up but the result was never really in doubt after Sean O’Shea drilled Kerry’s first goal to the net in the 29th minute when his team were playing against a strong wind.

Kerry welcomed back All-Star David Clifford for his first match of the year. Clifford almost scored a goal after just 20 seconds and finished with a tally of 0-5 before being substituted with four minutes left. Considering it was his first match after a long lay-off the corner-forward looked sharp and lively, and will be in contention to play some part in next week’s league final against Mayo.

Along with O’Shea and Clifford, Dara Moynihan and the superb Stephen O’Brien impressed in a slick Kerry forward-line.

Clifford almost goaled in his team’s first attack, only to be denied by a smart save from Colm Lavin. Niall Kilroy opened the scoring with a Roscommon point after three minutes before Clifford equalised and then set up Tom O’Sullivan for a point after nine minutes.

Kerry native Conor Cox, who transferred to Roscommon this season, levelled from a free in the 11th minute and Anthony Cunningham’s team were on top for the next 12 minutes as they out-scored the visitors by 0-4 to 0-1.

Cathal Cregg sent over a point from play after 13 minutes followed by a well-judged free from Donie Smith. In the 16th minute a long delivery left Clifford clear on goal but his rasping shot glanced over off the crossbar. Cox and Kilroy set up wing-back Ronan Daly for a good point after 20 minutes and Shane Killoran stretched the lead to three following astute play from Cregg.

However, that was as good as it got for the Rossies as Kerry hit back decisively. O’Shea and O’Brien converted points before the Kerry forwards pounced for the goal they had been threatening for most of the first-half.

Following a patient, intricate move, Moynihan and O’Brien released O’Shea who finished emphatically. O’Shea and Clifford tagged on points from frees and while Cox and Smith responded with long-range scores for Roscommon, a Moynihan point left Kerry three ahead at half-time.

Peter Keane’s team took up where they left off as O’Shea and Clifford slotted frees soon after the resumption. O’Shea stretched the advantage to six points by the 43rd minute. Three minutes later, man of the match O’Brien got the goal his tireless work deserved even if his finish was untidy after another fluid move involving Tommy Walsh and O’Shea.

Roscommon brought in Diarmuid Murtagh for his first match of the season after a long injury lay-off and the corner-forward made an immediate impact as he collected a pass from Enda Smith and sent over a point. Cox tagged on two frees to bring the deficit back to six with 16 minutes left.

Kerry quickly quenched any hint of a Roscommon comeback by reeling off three points in four minutes from Clifford, O’Shea and James O’Donoghue who had just come on as a sub.

Ronan Daly and Murtagh responded with points but Kerry rounded off an impressive campaign which has seen them six matches out of seven with points from O’Brien, Moynihan and Diarmuid O’Connor. Sean Mullooly, Conor Hussey and Shane Killoran were best for a Roscommon side whose attentions will now turn to their Connacht championship first-round match against Leitrim.

Referee: A Nolan (Wicklow) replaced by N Cullen (Fermanagh) (70’ due to injury).