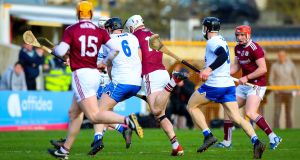 Galway’s Joe Canning is hit hard by Kevin Moran, forcing him to leave the pitch on a stretcher. Photograph: Tommy Dickson/Inpho

In the tunnel afterwards, our first question to Micheál Donoghue wasn’t about the result. It was about Joe Canning. This semi-final was thundering along at a right old clip, with Waterford doing their manful best to hang on for a result when Canning went on one of his to-hell-with-it runs, barrelling in on goal in an attempt to rouse a Galway revival. He swung off balance as he got crowded out and when he went down he didn’t get up.

If the stilled silence in Nowlan Park crowd didn’t tell you it looked serious, the call for a stretcher did. “He’s still getting assessed there so we won’t know for a while,” said Donoghue. “I think it was his groin. He took a few heavy hits on it and I’d be intrigued to watch it back and see the hits he got going into it, just before it.”

It put the tin lid on a miserable enough day for Galway. Canning only felt the need to go into Super Joe mode because they were a goal down late on in a game they had previously been in control of. Losing a league semi-final is an irritation; losing Canning for any length of time would amount to considerably more than that.

For Waterford, a league final beckons. Whatever happens next Sunday, Paraic Fanning has put together a rookie league campaign that will be no weight for them to carry into the summer. Finding a way for a group of players to coalesce effectively after the emotional heft of the end of the Derek McGrath era was no small task, yet he looks to be going the right way about it.

The best days for any team are the ones where they snap back the elastic on a game that had been haring off in the opposite direction. Waterford lost Mikey Kearney for the closing 20 minutes here to a second yellow card and were playing into a stiff enough breeze all the while. And still they managed to extract a win, outscoring Galway by 0-6 to 0-2 when they were down to 14 men. Bank that sort of deposit and it just grows and grows.

“We certainly got the bit between our teeth at that stage,” Fanning said afterwards. “We knew we were in the game, we had just pushed ahead and in fairness when we get a chance like that, we’ve shown we know how to close out the game.

“I knew we were doing well and we were in the game. I do think the lads put in a massive shift and we had to. We’d to do one or two tweaks to our shape there to try to get over the line. But the lads implemented brilliantly out there just to get us through it. they emptied themselves, they emptied all they had.”

That said, Galway will ultimately see this was a careless day’s work. They had Waterford on toast for most of the first half, even playing into the wind. They were 0-5 to 0-1 ahead after five minutes, 0-11 to 0-6 up after half an hour. By that stage, the scoreline told a story that would be hard to stand up in court. The five-point margin did Galway no justice.

But then, three things happened inside five minutes. Two of them were saves by Stephen O’Keeffe, the Waterford goalkeeper. The first of them was the best of them, an acrobatic dive to his right to get an unlikely stick to Davy Glennon’s 27th minute shot. The second came a minute later, a smothering effort on Canning that left the Galway prince limping and probably contributed to his subsequent missed 65. Waterford were hanging on.

The third thing was a fluke goal soon after. Stephen Bennett drilled a low free into the Galway square and the ball missed every stick in the thicket of hurleys to sail untouched into the net. Out of nowhere, Waterford were in a game they had mostly watched as it went on around them up to that point. Bennett and Canning promptly swapped frees to make it 0-12 to 1-7 at the break.

The two sides nipped and tucked the rest of the way. With the wind behind them, Galway should have seen it out but their shooting was all over the map. Jack Prendergast and Peter Hogan were an injection of vim off the Waterford bench and with Jamie Barron and Pauric Mahony blazing into the game, Fanning’s team were able to find the scores when it counted.

Ian O’Riordan: Learning to run for the first time all over again 19:00
Davy Russell ponders what might have been for Tiger Roll 18:07
Cycling Ireland thrilled with take-up for Zwift League series 17:02
Racetrack organisation does not envisage any closures in the short-term 15:03
Coronavirus crisis could cost the GAA up to €60 million 14:19
Crossword Get access to over 6,000 interactive crosswords