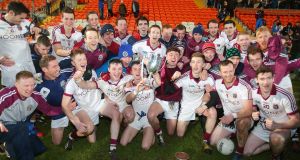 “Maybe people enjoyed Christmas too much,” says Shane McGuigan offering a polite and probably harsh reason as to why Slaughtneil fell short of achieving the dream double in the AIB club championship.

It was this time last year, and having won an Ulster hurling and football double, the small club from the middle of Derry had ambitions of repeating the feat on the All-Ireland stage. But instead, their hurlers lost to eventual champions Cuala in the hurling semi-final, their footballers falling to Dr Crokes in the football final.

A year on and that dream is still alive.

McGuigan was typically centre stage on Sunday, scoring 1-6 as Slaughtneil won a third Ulster football title in four years, outclassing Cavan Gaels at the Armagh Athletic Grounds. Like most of his club mates McGuigan also featured in the successful defence of their Ulster club hurling title last month, beating Ballygalget of Down.

Not forgetting the Slaughtneil camogie team, who also defended their provincial title to make it an unprecedented second Ulster treble. No club in the country has ever enjoyed such luminous times.

McGuigan, however, is not without validation in his observation: one of the main challenges for any club winning a provincial title is how to best bridge the gap over Christmas before their All-Ireland semi-final date in February, plus that potential All-Ireland date on St Patrick’s Day.

“We know what we need to do to improve upon last year,” says McGuigan, at 21 also reflecting the young age profile of the team.

“Maybe it was a week late we started back. It’ll not be the same this year. We’ve already got the hurlers, the non-dual players, out with sticks a couple of nights a week indoor to keep ticking over the winter period. Then when it comes to New Year we’ll be flat out again.”

Over the last two seasons, the club hurlers and footballers have played a total of 27 championship games, and have won 25 of them (thanks to Chrissy McKaigue, their indefatigable dual player, for that stat). That sort of record does add pressure and expectation, but again McGuigan appears to have taken on board some lessons from last year.

“The double thing wasn’t really thought about to be honest. Everyone said last year, ‘three provincial titles will never be done again’. We just took it one game at a time. We knew with this special group of players it could be done. Thankfully we got over the line.

“We’ve set the standard for ourselves well. You play for your family, your friends, your community. The work they’ve put in, not just for me but the younger teams, everything.”

Some might say Slaughtneil would have liked another crack at Dr Crokes; famed Nemo Rangers instead will be lining up against them.

“We’ll take them very seriously. They will probably go in as favourites – they’ve just took down the reigning All-Ireland champions. So we know we’ve a big battle ahead of us. We’ll analyse them well.

“Nemo Rangers have some tradition behind them too. An exceptional team. We won’t be taking them lightly. They’ve some brilliant county players. Look, we’ll give it a rattle, hopefully get over the line. Nemo Rangers will be an unbelievable task.

McGuigan’s goal on Sunday was a microcosm of the team ethic: the ball worked up the field, initially by full back Brendan Rogers, going through a series of hand passes, before being dispatched with utter composure.

“I was in a mind to pass across. The ’keeper stood up well. I put it to the near post and thankfully it went to the back of the net. I was expecting the ’keeper to make more of a move but he stood on the line so I just went for it.

“We never panicked. That’s what the words were at half-time. We knew we weren’t doing things our normal way. We were three or four points up, but missing easy chances, losing the ball in the tackle, kicking the ball away.

“Mickey [Moran, their manager] took us in at half-time, had a few words, the main thing was ‘don’t be panicking . . .go back to the way we train, we play’, through the hands, composure in the shot. We took our chances in the second half.”