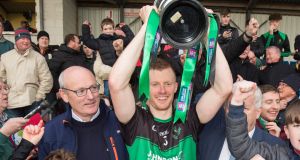 Late, late into the GAA football year and still the drama doesn’t stop. Maybe Nemo Rangers’ ransacking of All-Ireland club champions Dr Crokes is a sign that things are beginning to turn for Cork football. It wasn’t just that their county champions came bouncing into a sunny Páirc Uí Rinn to win by a clear five points – it was that they stunned the local crowd with the audacity of their opening act.

They carved Crokes open for a series of goal chances and never looked back after a 0-9 to 0-5 first-half showing which manager Larry Kavanagh happily conceded was “as good as we have been. I’d say it was as impressive a display as from any Nemo team down the years.”

The city side have been locked out of provincial honours for a long seven years and they were rewarded here for backing their football acumen rather than simply trying to cope with Dr Crokes’ versatility. It finished 0-16 to 0-11: they never allowed Crokes to get a foothold in the match.

“Our plan was to run at their defence at every opportunity because we believed we could score goals. The fact that we didn’t certainly worried us at half-time as we had created a lot of chances. Yet, our lads didn’t panic. Some of them are still quite young and are learning.”

Luke Connolly was a particular thorn for Dr Crokes and finished with 0-10 to his name.

Further north, in the Connacht showpiece, scores were harder to come by. Corofin almost got caught by Castlebar Mitchels at the death of a tough game, played in the usual dusky squall of late November. But they recovered their poise to take a record eighth Connacht championship by 2-13 to 1-12.

It is the latest triumph in a phenomenal period of success by the Galway club who have won 11 county titles since the turn of the millennium. This win in Tuam stadium is their fifth provincial success of the last decade.

“That is deserving and reflective of the work put in by people in this club over the last 20, 25 years,” said Kevin O’Brien, the team manager.

“It is hard to believe that we’d be here after winning the first in 1991. It is a great credit to Corofin. We probably left one or two behind us, but we’ll take being top of the pile.”

The Galway side lost fullback Kieran Fitzgerald early in the match and captain Ciaran McGrath on the stroke of full-time but still had enough quality to come through.

“Yes, and Conor Cunningham went as well. Fitzy was a concussion. The other two are muscle injuries. They were big losses. But I think we’ve shown that lads are chomping at the bit to come and I’m delighted that when they got their chance today, they showed what they are capable of.”

Slaughtneil’s tireless quest for excellence also continues in Ulster. The Derry men comfortably defended their provincial title with a 1-15 to 0-10 victory over Cavan Gaels. With the Ulster hurling title already safely retained, the small Derry club are again within touching distance of an appearance in both All-Ireland club finals next year. Shane McGuigan fired 1-06 for the defending champions.

In the volatile Leinster theatre, St Loman’s hauled themselves out of a seven-point hole against Simonstown Gaels to take their place in the provincial final after a thrilling closing scramble. They will face Kildare champions Moorefield, who were too strong for Rathnew on an afternoon that was wintry through and through.