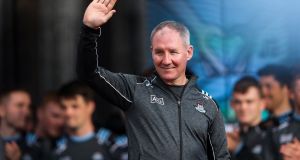 Jim Gavin has stepped down as Dublin senior football manager after leading them to a historic five All-Ireland titles in a row earlier this year.

Gavin took the reins in 2012 and led Dublin to their second All-Ireland title in three years the following campaign when they beat Mayo to win the 2013 All-Ireland.

After losing out to Donegal in the semi-finals in 2014, Dublin then embarked on a five-year stretch which would see them make history by winning five All-Ireland titles in a row, culminating in the replay win over Kerry in September of this year.

Those six All-Irelands are added to the five National league titles and seven Leinster Championship titles which Dublin have won during Gavin’s seven-year reign and he leaves the county unbeaten in 37 championship matches.

Since seeing off Kerry in September, Gavin has kept his counsel on what the future would hold but on Saturday morning the announcement came that he has stepped aside.

A statement on the Dublin GAA website read: “Jim Gavin has this morning informed the County Officers, his management team and players that he was handing back the reins of the Dublin Senior Football team to the County Committee.”

“Dublin GAA will be forever grateful to Jim Gavin for his dedication, commitment and contribution as a player and, since 2003, leading the next generation of players at U21 and Senior level.

“I regret his departure but appreciate the huge sacrifices he has made over this period.

“The committee will commence the process of considering suitable candidates to replace Jim and his management team shortly.”