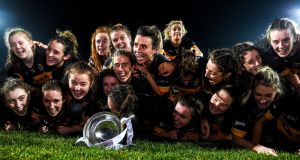 Points from Chloe Miskell and Annette Clarke had hauled Kilkerrin/Clonberne back level as the full-time whistle approached, but one final patient attack was finished brilliantly by Fitzgerald on the turn and Shane Ronayne’s side completed the successful defence of their title after an enthralling encounter.

The Galway club started the quicker of the two sides with Claire Dunleavy and Miskell opening their accounts. Fitzgerald got reigning champions Mourneabbey off the mark but further scores from Ailish Morrissey and two from Olivia Divilly helped first time finalists Kilkerrin/Clonberne move 0-5 to 0-1 ahead.

However, Mourneabbey struck back with 1-2 in a two-minute spell to hit the front for the first time in the contest. Noelle Healy pointed before her side overturned a Lisa Murphy kickout, and Healy slipped Doireann O’Sullivan through on goal before the Cork captain bundled the ball home despite Murphy’s best efforts.

Divilly levelled the game with a free but Kilkerrin/Clonberne were dealt a severe blow when Nicola Ward, who picked up an All-Star last weekend, was forced off through injury. Mourneabbey continued to look menacing up front and when Healy fed Fitzgerald and she palmed to the net it appeared they had claimed their crucial second goal. However, after lengthy debate between referee Maggie Farrelly and her umpires, Fitzgerald was deemed to be in the square and the goal was chalked off.

Doireann O’Sullivan and Eva Noone traded scores before Ciara O’Sullivan and Fitzgerald put Mourneabbey two ahead approaching half-time. Clarke kicked a fine score after good work by Hannah Noone and Louise Ward as Mourneabbey led by 1-6 to 0-8 at the break.

After the restart Doireann O’Sullivan resumed the scoring for the Cork side, before Lynsey Noone’s goal bound effort was deflected over by Mourneabbey goalkeeper Meabh O’Sullivan. Ailish Morrissey then managed to level the contest for the seven-in-a-row Galway champions as the quality of football increased as the pace of the game escalated. Kilkerrin/Clonberne saw Hannah Noone sent to the sin bin but Morrissey moved them a point in front with a well-taken score.

With both sides seeking the winner Divilly dropped a free short, while Ailish Morrissey, Clarke and Dunleavy all kicked wides late in the game for Kilkerrin/Clonberne.

And they were punished for these misses when Fitzgerald kicked the match winning score to secure back to back titles for Mourneabbey.