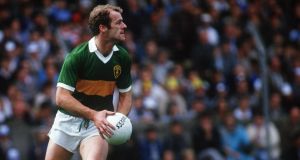 I shall be as delicate as possible in recalling this in order to preserve anonymity. An irascible boss arrives at a promotional event to find that it has attracted few – well, no prospective clients.

His volcano no longer dormant, he turns on the person whose initiative it had all been. Having no appetite for the imminent lava flow, the latter when asked to account for themselves simply says, “finished”.

Years later it always stayed with me as one of the most powerful manifestos of departure. Nothing ambiguous, nothing left tantalisingly open to conjecture: Finished!

In what feels like a barrage of severance announcements, intercounty players have been busily bringing to permanent – and in some cases, temporary – conclusion a host of playing careers.

Maybe it’s because nothing else is happening that these declarations have acquired elevated status as news. That might be the reason we’re hearing so much about them but why are they publicised in the first place?

There is within the GAA a certain school of thought that sees such individual spotlighting as inimical to the collectivism of team sport and anathema to the Spartan protocols of being carried out on your shield and therefore well beyond reflecting on the fact that you were on your way.

I remember Peter Cassells, formerly head of ICTU but permanently of Meath and a great football conversationalist, saying that his brother, All-Ireland winning captain, Joe, would not be dealing in public expressions of retirement. He’d simply not turn up some year and explain only if anyone asked – the way they did in Kerry.

How many times are reporters these days told after season-ending matches that “now isn’t the time for those sort of decisions”?

In days gone by the sense of intercounty being representative was stronger. Players were invited to attend matches or training. Postcards were sent at one stage.

It was once upon a time. One of the most eminent Kerry players, four-time Footballer of the Year Jack O’Shea, matter-of-factly let his retirement from a career that earned seven All-Irelands drop in the dressingroom after Clare’s monumental Munster title win in 1992.

“I am very disappointed that it has ended like this but let’s face it, we were beaten by a better team. Clare played with great spirit and commitment today. It was great for them and for football.”

Ironically, that preoccupation with a disappointing end to your career was expressed by O’Shea’s team-mate, the late Páidí Ó Sé when speaking about what haunted him towards the end of his playing days.

“One thing used go through my mind,” he once said. “Is this going to be the day a fella gets 2-6 off me, takes me on a tour of Croke Park? It helped me keep that extra bit ahead of the posse.”

In days gone by the sense of intercounty being representative was stronger. Players were invited to attend matches or training. Postcards were sent at one stage. Feargal McGill, who now plots the GAA’s way through pandemic-blitzed fixture schedules as director of games administration, in his day played rather than organised.

He recalls as an underage player with the county, he simply read the Leitrim Observer, which would state economically that the bus would arrive in Bornacoola on Saturday or Sunday morning to pick up “F McGill” and whoever else – as part of an itinerary of under-16 or minor collection points.

Ultimately, you were picked until you weren’t.

There is a tendency to blame the GPA for all this self-conscious declaration about the end of a playing career and it is true that the players’ body is in a position to advise on, write up and distribute whatever sentiments someone wants to express on the matter but we are also in an age when no-one needs any help in mediating a public message.

Social media revolves around the disclosure of aspects of individual lives and such bulletins are frequently less interesting than the fact that someone has decided to stop representing their county.

Modern players put in enormous commitment to their intercounty careers. Desire for some acknowledgement of that is natural. As recently as last week, Tyrone All-Ireland winner Colm Cavanagh reiterated his disappointment that no one on the county executive nor from team management bothered to mark his own retirement when it came after a 13-year engagement with the county team.

Mind you, he also intimated that he might review the decision now that Tyrone are under new management.

On that topic, serial All-Ireland winners Dublin now have two of their most decorated players “stepping away” for an indeterminate period of time. In a way it’s an affirmation of Gaelic games as amateur pursuits for all the talk of professional demands in the modern game.

Neither Jack McCaffrey nor Paul Mannion released statements but both have decided there’s enough going on in their lives for football not to be a feasible component over the next while. Admittedly it’s a decision both can take with half a dozen All-Ireland medals rattling in their pockets.

Do they privately weep because there are no more worlds to conquer? Would the proposed, post-pandemic rationalised intercounty season make that commitment more manageable?

It’s tempting to see the parade of permanent retirements as some variation on Beckett’s theme. “Writing becomes not easier but more difficult for me. Every word is like an unnecessary stain on silence and nothingness.”

It can be hard to do but everyone’s instinct is to say that they were there.

More directly and uncomfortably from Beckett is the line in All That Fall: “Business, old man, I said, retire from business, it has retired from you.”

Dublin’s Brian Mullins was able to frame the essential truth in characteristically blunt fashion when asked the hardest thing about retirement.

“Realising I was past it.”

In other words, finished.